Read MoreHide Full Article
Duke Energy Corp.’s (DUK - Free Report) subsidiary, Piedmont Natural Gas, recently announced that it has reached an agreement with key consumer groups of North Carolina, regarding a rate hike proposal for the region’s electricity rates. The new rates, if approved by the North Carolina Utilities Commission, will result in an average residential customer paying an extra $65 per year, beginning from November 2021.
The approval of the request also depends on completion of its two major projects in North Carolina. These two projects comprise construction of a new natural gas storage facility in Robeson County, NC, and enhancements to an existing storage facility in Huntersville, NC.

Utilities follow a disciplined strategy of energy rate hikes at regular intervals to generate funds in order to carry out long-term infrastructure upgrade work.
The primary rationale behind the rate increase request made by Piedmont Natural Gas was to recover capital investments of $1.7 billion. Through this investment, Duke Energy intends to expand and fuel growth in its communities. The move highlights Piedmont Natural Gas’ focus on providing reliable natural gas services to existing customers while striving for improvement in a bid to attract new customers in the region.

Benefits of the Rate Hike

The latest agreement takes Piedmont Natural Gas a step closer toward achieving its request for a 10.4% revenue hike, originally filed in March 2021.
Per the latest announcement, the rate increase request, on approval, will effectively result in a residential customer’s average monthly bill increasing $65 per year. This is, however, 31.6% lower than the average monthly bill hike that Piedmont Natural Gas’ originally proposed.
Consequently, annual revenues earned by Duke Energy following the new rate hike would be 24% less than what the company had requested earlier this year.

Duke Energy has been following a very disciplined expansion strategy, as evident from its various investments made over the years. The company’s growth plans include expansion of its existing scale of operations, and implementing new and improved modern technologies at the utility’s facilities. To this end, it is worth mentioning that the company has a robust five-year capital plan, which includes an investment of $ 5.7 billion in its Gas Utilities & Infrastructure growth projects over the 2021-2025 time period. Such investments are anticipated to boost Duke Energy’s earnings in the gas business. The company expects investments to help it deliver growth of 9% in its earnings through 2025.
The latest rate adjustment plan is in sync with Duke Energy’s strategy of focusing on growing and expanding in the renewable energy space. We expect the rate increase to help the company in achieving its goals in the natural gas arena.

Alongside Duke Energy, other major utility companies such as NextEra Energy’s (NEE - Free Report) and Ameren Corporation (AEE - Free Report) , have proposed for an increase in gas rates for their customers.
For instance, in August, NextEra Energy’s subsidiary, Florida Power & Light Company (“FPL”), in collaboration with other customer groups filed a request to increase energy rates by $3 billion over the next four years. The proposal primarily reflects FPL’s efforts to recoup investments in escalating natural gas burning capacity at its various plants.
Earlier in March, Ameren’s subsidiary in Missouri filed a request with the Missouri Public Service Commission to adjust its electric and natural gas base rates for 2022.  If approved, natural gas rates would increase by approximately $4 a month for an average residential customer.

In the year-to-date period, Duke Energy’s shares have gained 27.8% compared with the industry’s  growth of 12.4%. 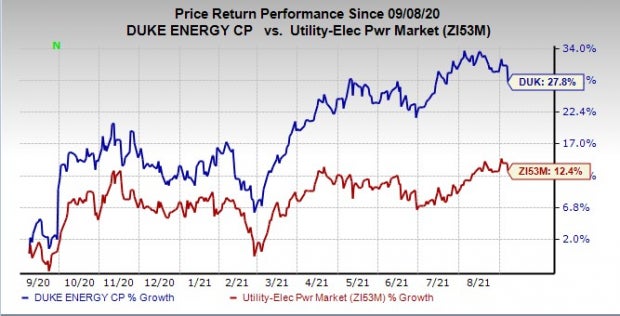 Duke Energy currently carries a Zacks Rank #3 (Hold). A better-ranked stock from the same space is Exelon (EXC - Free Report) , which currently sports a Zacks Rank #1 (Strong Buy). You can see the complete list of today’s Zacks #1 Rank stocks here.
Exelon’s long-term earnings growth rate currently stands at 3%. The Zacks Consensus Estimate for 2021 earnings has moved north by 1.1% to $2.81 in the past 30 days.

Here's Why You Should Invest in Integer Holdings (ITGR) Now