The biotech sector has been in focus over the past week, with the spotlight on Moderna’s (MRNA - Free Report) COVID-19 vaccine, along with other regulatory and pipeline updates.

Moderna Submits Data to EMA: Moderna announced that it submitted data to the European Medicines Agency (EMA) seeking approval for a booster dose of its COVID-19 vaccine.  It has submitted for conditional marketing approval (CMA) with the EMA for the evaluation of a booster dose of the COVID-19 vaccine (mRNA-1273) at the 50 µg dose level. The regulatory application was based on data from an ongoing phase II study. Data from the study showed that the booster dose induced robust antibody responses following inoculation in study participants. The vaccine uses the tradename of Spikevax in Europe and has been granted conditional marketing authorization by the European Commission for active immunization to prevent COVID-19 in individuals 12 years of age and older.

BioMarin Plunges on Regulatory Update:  Shares of BioMarin Pharmaceutical Inc. (BMRN - Free Report) were down after the FDA placed a clinical hold on the phase I/II study evaluating candidate BMN 307, an investigational AAV5-phenylalanine hydroxylase (PAH) gene therapy. The study is evaluating BMN 307 in adults with phenylketonuria (PKU). The clinical hold was placed by the agency based on interim safety findings from a pre-clinical, non-GLP pharmacology study. In the pre-clinical study, the company evaluated the highest dose of the candidate at the 2e14 Vg/kg level in seven mice out of 63 animals. Data from the pre-clinical study showed that six mice that were administered the highest dose had tumors on liver necropsy after 52 weeks of dosing. These tumors showed evidence for integration of portions of AAV vector into the genome, a key component of the gene therapy candidate. Among these six mice with tumors, five had adenomas (type of non-cancerous tumor that may affect various organs) and one was found with hepatocellular carcinoma. BioMarin has temporarily halted enrollment in the study until the investigation is completed.

Forte Plunges on Failure of Study: Shares of Forte Biosciences, Inc (FBRX - Free Report) plunged significantly after the company announced that the mid-stage study of its lead product candidate FB-401, which is being evaluated for the treatment of atopic dermatitis, was not successful. Consequently, the company will not advance the study any further. Top-line data from the phase II study of FB-401 failed to meet statistical significance for the primary endpoint of EASI-50 (the proportion of patients with at least 50% improvement in atopic dermatitis disease severity as measured by EASI). It is important to note that the main goal of EASI-50 was achieved by 58% of the subjects who were administered FB-401 compared with 60% of the enrollees on placebo (p=0.7567).

Adaptimmune Gains on Deal With Roche: Adaptimmune Therapeutics plc (ADAP - Free Report) gained 28.9% following a license deal with Roche’s subsidiary Genentech for the development of allogeneic T-cell therapies for up to five shared cancer targets and development of personalized allogeneic T-cell therapies. While Adaptimmune will be responsible for developing clinical candidates using its induced pluripotent stem cell (iPSC) derived allogeneic platform to produce T-cells (iT cells) for each component, Genentech will be responsible for the input TCRs and subsequent clinical development and commercialization.

Per the terms of the agreement, Adaptimmune will receive an upfront payment of $150 million and additional payments of $150 million over five years, unless the agreement is earlier terminated. Additionally, the company is entitled to receive research, development, regulatory, and commercial milestones payments of more than $3 billion in aggregate value. Adaptimmune will also receive tiered royalties on net sales in the mid-single to low-double digits.  The company obtains the right to opt in to an equal profit and cost sharing arrangement in the United States for "off-the-shelf" products. If Adaptimmune elects to opt in, then the company will be eligible to share 50% of profits and losses from sales in the country on such products and is eligible to receive ex-U.S. regulatory and sales-based milestone payments, as well as royalties on ex-U.S. net sales.

INmune Gains on Positive Data:  Shares of INmune Bio, Inc. (INMB - Free Report) gained after it announced positive data for its lead Alzheimer’s disease (AD) candidate XPro (pegipanermin), its selective DN-TNF inhibitor. The biomarker data from the analysis of the company’s recently concluded phase I study of XPro in Alzheimer’s patients showed that the candidate decreases multiple species of Phospho Tau (pTau). It also improves neuroimaging biomarkers of myelination in patients with AD.

XPro treatment showed a statistically significant decrease in phospho Tau 217 (pT271) and pT181, and an improvement in an imaging biomarker of myelination. The patients treated with 1.0 mg/kg of XPro once a week for three months showed a 46% reduction in CSF pT217 and a lesser reduction in pT181. In addition, improvement in white matter MRI metrics, including a 16% rise in radial diffusivity, a biomarker of remyelination was also reported.

Impel Wins FDA Nod for Migraine Treatment:  Impel NeuroPharma, Inc. (IMPL - Free Report) announced that the FDA approved Trudhesa (dihydroergotamine mesylate) nasal spray (0.725 mg per spray) for the acute treatment of migraine with or without aura in adults.  The new drug application for Trudhesa was based on data from the phase III STOP 301 study. The primary goal of the study was to assess the safety and tolerability of Trudhesa. Data from the same showed that treatment with Trudhesa was generally well tolerated, and exploratory efficacy findings showed that it provided rapid, sustained, and consistent symptom relief. Trudhesa led to consistent efficacy even when taken late into a migraine attack.

The Nasdaq Biotechnology Index has gained 1.63% in the past four trading sessions. Among the biotech giants, Moderna has gained 15.85% during the period. Over the past six months, shares of Moderna have soared 253.44%. (See the last biotech stock roundup here: Biotech Stock Roundup: REGN's Study Update, INCY Wins Drug Approval & More). 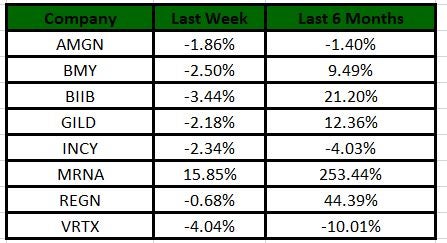