lululemon athletica inc. (LULU - Free Report) reported robust second-quarter fiscal 2021 results, with the top and bottom lines surpassing the Zacks Consensus Estimate as well as improving year over year. Also, the company noted that all key metrics reflected marked improvements from the second quarter of fiscal 2019, which represents the pre-pandemic level. Results were driven by robust response to the company’s products, improved store productivity and continued momentum in e-commerce.

However, it has been witnessing supply-chain challenges, driven by the pandemic-led factory closures, congestion at ports and reduced airfreight capacity, which are likely to impact its business in the second half of fiscal 2021. Recently, some of the factories in Vietnam, which are used to source lululemon’s products, have closed due to another wave of COVID-19 outbreak in the region. This has delayed deliveries of products in recent months. The ongoing issues at the ports and reduced airfreight capacity have not only led to delays but also resulted in increased freight costs. The factors have impacted the company’s margins to some extent in the fiscal second quarter.

Despite the headwinds related to COVID-19, including supply-chain disruptions, the company raised its guidance for fiscal 2021. Management noted that its strong business momentum continued in the second half of fiscal 2021.

Shares of the Zacks Rank #2 (Buy) company rallied 13.8%, following the robust second-quarter fiscal 2021 results and upbeat fiscal 2021 view. We note that shares of the company have gained 15.5% in the past three months compared with the industry’s 4.2% growth. 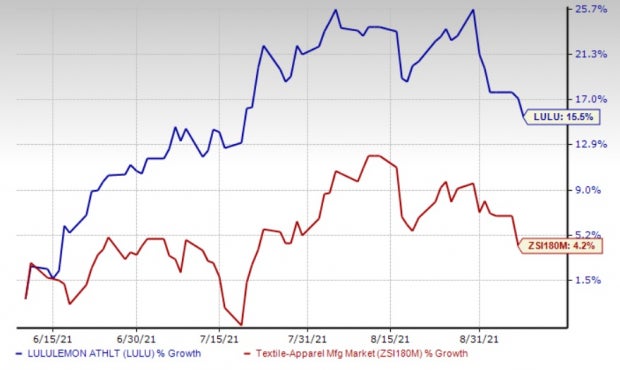 lululemon’s adjusted earnings of $1.65 per share in the fiscal second quarter beat the Zacks Consensus Estimate of $1.21 and increased substantially from earnings of 74 cents in the year-ago quarter.

The Vancouver, Canada-based company’s quarterly revenues advanced 60.8% year over year to $1,450.6 million and surpassed the Zacks Consensus Estimate of $1,330 million. On a constant-dollar basis, revenues increased 56%. Top-line growth was driven by strength across all categories, channels and geographies. The momentum in brick-and-mortar stores, driven by improved footfall, as well as continued expansion in the e-commerce channel was a driver.

Compared with the second quarter of fiscal 2019, earnings per share were up 71.9% from 96 cents, while net revenues improved 64%. On a two-year compounded annual growth rate basis, revenues rose 28%.

In the reported quarter, revenues at company-operated stores advanced 142% year over year and 9% on a 2-year CARG basis to $695.1 million. It continued to witness strong traffic trends, which increased more than 150% from the last year. Management pointed out that in-store productivity was in line with comparable fiscal 2019 levels and reflected an improvement from 88% productivity in first-quarter fiscal 2021. Direct-to-consumer sales rose 8% to $597.4 million and were up 4% in constant currency. Direct-to-consumer revenues represented 41.2% of the company’s total revenues compared with 61.4% in second-quarter fiscal 2020.

In the digital channel, revenues increased 66% on a two-year CAGR basis, benefiting from strength in traffic and conversions. Digital comps rose 4% in the fiscal second quarter compared with a 157% increase in the year-ago quarter. The increase in the year-ago quarter was driven by online warehouse sales and events that were not repeated this year.

Gross profit advanced 72% year over year to $842.7 million in second-quarter fiscal 2021. The gross margin expanded 390 basis points (bps) year over year to 58.1%.  On a two-year basis, the gross margin increased 310 bps from 55%, driven by 290-bps leverage in occupancy, product team costs and depreciation, and 60 bps of favorable foreign exchange, offset by a 40-bps decline in product margin. The decline in product margin was mainly driven by a 120-bps increase in airfreight expenses due to COVID-19, partly negated by lower markdowns than in 2019.

SG&A expenses of $541.3 million increased 53.4% year over year and 70.3% on a two-year basis. SG&A expenses, as a percentage of sales, declined 180 bps year over year and increased 130 bps on a two-year basis to 37.3%. SG&A expense leverage on a year-over-year basis is mainly related to a higher top line than the COVID-impacted second-quarter fiscal 2020. The deleverage from the 2019 levels was mainly due to the consolidation of MIRROR’s results this year and deleverage on foreign exchange.

Adjusted income from operations rose 120.2% year over year to $299.2 million in the fiscal second quarter. Adjusted operating margin of 20.6% expanded 560 bps year over year and 160 bps on a two-year basis.

In the fiscal second quarter, the company opened 11 stores. As of Aug 1, 2021, it operated 534 stores. As the COVID-led restrictions ease, it currently has 95% of its stores open across the globe.

In fiscal 2021, the company expects to open 45-55 net new company-operated stores, including 35-40 stores in the international markets.

lululemon exited the fiscal second quarter with total liquidity of $1.57 billion, which indicates a strong financial position. This included $1,170 million of cash and cash equivalents, and 397.2 million available under its revolving credit facility. Its stockholders' equity was $2,671.2 million as of Aug 1, 2021.

Inventories were up 17.4% year over year to $789.8 million at the end of the fiscal second but below the company’s expectations of a 25-30% increase. The lower-than-expected inventory stemmed from the top-line outperformance as well as industry-wide supply-chain disruptions. On a 2-year CAGR basis, inventory grew 26%.

In the first half of fiscal 2021, the company generated an operating cash flow of $499.8 million. It incurred a capital expenditure of $80 million in the fiscal second quarter compared with $53 million in second-quarter fiscal 2020. The capital spending is mainly related to store capital for new locations, relocation, and renovations; supply-chain investment; and technology spend to support business growth.

At the end of third-quarter fiscal 2021, the company expects inventory levels to increase 15-20% from that reported in third-quarter fiscal 2020. The company is witnessing some delayed inventory receipts due to congestion at the ports and the recent COVID-related closures of certain factories in Southern Vietnam. While the expected inventory level is enough to support its revenue projection, it is lower than the initially targeted levels due to supply-chain challenges.

For fiscal 2021, the company anticipates incurring a capital expenditure of $365-$375 million.

For third-quarter fiscal 2021, it expects net sales of $1.4-$1.43 billion, indicating two-year CAGR growth of 24-25%. The company currently has 95% of its stores open. Management expects the gross margin to expand 50-100 bps from that reported in second-quarter fiscal 2019. Gross margin growth from the fiscal 2019 comparable period can be attributed to higher e-commerce penetration, and occupancy and depreciation cost leverage. The company’s gross margin guidance for the fiscal third quarter includes a 200-bps impact of higher airfreight costs, owing to port congestion and capacity constraints.

The company expects SG&A expenses for the fiscal third quarter to deleverage 300-350 bps from that reported in the second quarter of fiscal 2019. The deleverage mainly relates to higher depreciation due to accelerated investments to support the e-commerce business in 2020 and 2021, consolidation of MIRROR’s results this year, and increased investments in brand-building for its growth initiative.

Adjusted earnings are anticipated to be $1.33-$1.38 per share, whereas it reported $1.16 in the prior-year quarter and 96 cents in third-quarter fiscal 2019. This includes the operating results of MIRROR but excludes acquisition and integration costs.

The sales guidance now assumes e-commerce sales growth in the mid-teens, whereas it saw outsized strength in 2020. Earlier, the company predicted high-single-digit e-commerce growth. The fiscal 2021 view assumes phased reopening of the factories used for sourcing products in Vietnam in mid-September.

Adjusted earnings per share are expected to be $7.38-$7.48 compared with $6.73-$6.86 mentioned earlier. This includes a modest dilution of 3-5% related to the MIRROR acquisition.

Looking for Other Favorable Stocks? Check These