Exxon Mobil Corporation (XOM - Free Report) recently discovered hydrocarbons at Pinktail in the Stabroek Block, located offshore Guyana. The Pinktail well found 220 feet of net pay at 3.7 miles southeast of Yellowtail-1, which is moving rapidly toward the final investment decision. It is also close to the currently producing Liza Phase 1.

Close proximity to other discoveries certainly boosts Pinktail’s economic value. The well was drilled at 5,938 feet of water using the Noble Sam Croft drilling ship of Noble Corporation (NE - Free Report) . Pinktail marks the 20th significant discovery in the Stabroek Block. With the latest discovery, the company has added to its previously estimated 9 billion barrels of oil equivalent of recoverable resource in the block. The discoveries made so far at the site have the potential of adding at least six FPSO vessels by 2027. Furthermore, the number of FPSO vessels can rise to 10 in the block.

The company also announced the successful appraisal of the Turbot discovery. Additionally, the Turbot-2 well found 43 feet of a newly identified, high-quality hydrocarbon-bearing sandstone reservoir net pay. Its characteristics might be somewhat different from the Turbot-1 discovery well. The test results are likely to be used during future developments.

The Liza Unity FPSO vessel, which will be used for the Liza Phase 2 development, is currently on its way to Guyana. Production from the Liza Phase 2 is likely to commence in early-2022. It is expected to produce 220,000 barrels of oil per day (bpd). The phase 1, which started production in late-2019, is currently producing at its nameplate capacity of 120,000 bpd.

Operator ExxonMobil owns a 45% stake in the 6.6 million acres Stabroek Block, while partners Hess Corporation (HES - Free Report) and CNOOC Ltd. hold a 30% and 25% interest, respectively. The companies anticipate multibillions of exploration potential to be still left in Guyana.

The rising number of discoveries in Guyana can enable ExxonMobil and its partners to ramp up production from the South American country while maintaining economies of scale. The close proximity of the discoveries is also expected to help the companies reduce costs of development and increase the lifespan of the platforms. The companies are likely to receive incremental cash flows from the discoveries.

Also, revenues from the oil discoveries are expected to help the local economy. The hydrocarbon industry in Guyana, where the issue of poverty is quite concerning, can significantly support the local government. The booming industry in the country is expected to generate numerous local jobs in the coming days.

The stock has gained 31.2% in the year-to-date period compared with a 21.7% rise of the industry it belongs to. 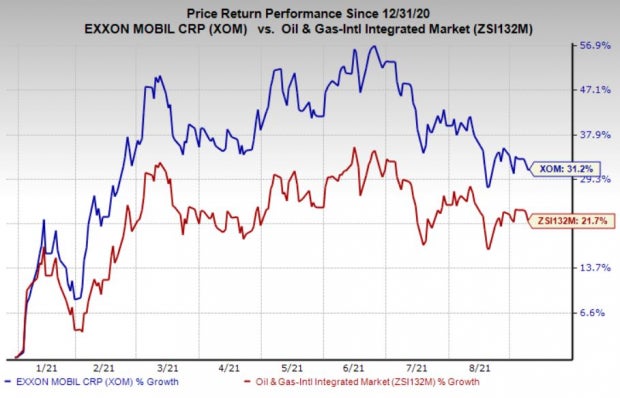 The Zacks Consensus Estimate for Comstock Resources’ earnings for 2021 is pegged at $1.10 per share, signaling a major improvement from the year-ago figure of 23 cents.