August auto sales data for China — the world’s largest car market — was released last week. Per the China Association of Automobile Manufacturers, vehicle sales in the country declined 17.8% year over year to 1.8 million units, tumbling for the fourth consecutive month. Rising COVID-19 cases in South-East Asia and the global shortfall in semiconductor supply resulted in the decline. While chip crunch and manufacturing delays hit automakers, electric vehicles in China managed to sustain the momentum, with sales of new energy vehicles doubling year over year to 321,000 units in August.

Ford (F - Free Report) has called it quits on vehicle manufacturing in India, as it plans to shut down both its plants in the country.Despite running manufacturing operations in India for more than 25 years, the company has struggled to command a strong foothold in the country. With less than 2% of the passenger vehicles market share in the nation and more than $2 billion of accumulated losses to date, it makes sense for Ford to withdraw from India.The sale of all the current Ford models will be discontinued in the country once the existing inventories are sold off. Having said that, the auto giant will continue to sell some of the iconic models — including Mustang coupe and Mustang Mach-E — in India through imports and keep offering after-market parts, maintenance facilities, and warranty support to the existing owners.

General Motors (GM - Free Report) notified that it now expects a sharper-than-expected decline in its second-half 2021 vehicle sales and production in North America amid the ongoing shortage of microchips. It anticipates the chip crisis to lower wholesale deliveries by about 200,000 vehicles during the second half of 2021. This is worse than the previous forecast provided during its second-quarter earnings call when the company had predicted that vehicle sales and production would be down about 100,000 units from the first half of 2021. The U.S. auto biggie has also extended the shutdown of various plants in North America. The firm’s Lansing Grand River factory, Lansing Delta Township assembly, and Wentzville plant in Missouri will remain idle till Sep 27.

Toyota (TM - Free Report) also slashed its production targets as rising COVID-19 infections are worsening the chip crisis. The Japanese auto biggie will curtail its worldwide production by about 40% in October, manufacturing 330,000 fewer vehicles than originally planned. This marks the second straight month that Toyota will be slashing production because of the shortage of semiconductor supply.  Its North American operations would see a production cut of around 60,000 to 80,000 vehicles in October.For fiscal 2022, Toyota trimmed its production forecast by 3% to 9 million units. Toyota currently sports a Zacks Rank #1 (Strong Buy).You can see the complete list of today’s Zacks #1 Rankstocks here.

Stellantis’ (STLA - Free Report) Chinese joint venture with GAC Group, called GAC FIAT CHRYSLER Automobiles, plans to shutter one of its two factories in China by next March.The GAC FCA intends to halt work at its Guangzhou-based factory and shift production to the factory in Changsha, the capital of Hunan province.The de-registration of JV's Guangzhou branch is scheduled for a March 2022 completion. The move to halt production in one of its factories represents the company’s restructuring operations in China, the world's biggest auto market, where it has struggled to capture a niche market. The production transfer from Guangzhou to Changsha is aimed at enhancing the utilization rate of plants and lower costs. 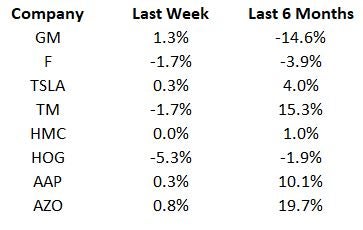 Industry watchers will track the passenger car registrations data in European Union for August 2021, which is likely to be released by European Automobile Manufacturers Association later this week. Also, stay tuned for coronavirus and chip crunch-related disruptions in the auto sector.

Coty (COTY) More Than Doubles in a Year: Will Momentum Stay?