The electric vehicle (EV) revolution is speeding up, with companies leaving no stone unturned to establish a strong foothold in this domain. Legacy automakers are stepping up e-mobility investment and setting ambitious targets to electrify their fleet. Pure-play EV players are fast filing IPOs to capitalize on the rising electrification trends. California EV startup, Rivian Automotive recently filed for an initial public offering and is seeking a valuation of  roughly $80 billion. China-based EV maker Iconiq Motors is also mulling a $4 billion U.S. IPO, per U.S. Automotive News.

While the EV makers are getting all charged up, countries, states, and cities are also stepping up their clean energy and e-mobility targets. Last week, New York Governor Kathy Hochul signed a bill that mandates all new passenger cars, light-duty trucks, and off-road vehicles sold in the state to be emissions-free by 2035. With this, New York follows California's lead in the push toward carbon-neutral vehicles. Its climate target would require 20% of the city's 2 million vehicle owners to transition to EVs by 2030. New York also aims to install a network of 10,000 curbside charge points by the end of the decade.

Meanwhile, the IAA Munich Mobility Show held in Munich from Sep 7-12, was swamped with EVs. Let’s take a sneak peek into some of the major reveals that dazzled the show.

At the event, Volkswagen’s (VWAGY - Free Report) subsidiary Audi presented the second in its series of three "sphere" conceptual cars — the Grandspher, which is scheduled to go into production in 2025. The company also unveiled ID.LIFE concept car. The all-electric compact crossover is likely to go on sale in 2025. Volkswagen’s ID.5, an all-electric model with a sportier stance than the current ID4, was also displayed at the fair. Daimler’s (DDAIF - Free Report) Mercedes-Benz continued the frenzy of the EQ EVs with the introduction of five battery-powered vehicles (plus a hybrid) at the event, by unveiling EQE, EQG, and EQB models. BMW AG (BAMXF - Free Report) disclosed its plans to double orders for battery cells, as it showcased the production versions of the company’s iX and i4 electric cars as well as a number of electric motorcycles.The most eye-catchy launch by this company was the BMW i Vision Circular Concept—the far-fetched look at what BMWs might look like in 2040.Stuttgart-based Porsche flaunted a future EV design that’s made for a hardcore Porsche fan who’s also a racer — the Porsche Mission R.Other noteworthy reveals at the fair included Hyundai's Robotaxi — a driverless vehicle integrated with level four autonomous technology, Dacia Jogger, Smart Concept 1and the 2025 Renault 5 EV prototype.

NIO Inc. (NIO - Free Report) announced an at-the-market offering to sell up to $2 billion of American depositary shares.If successfully completed, NIO’s deal would be the biggest U.S. equity offering by a Chinese company since Didi Global raised $4.4 billion from U.S. investors in June. NIO had previously revealed intentions of pursuing a second listing in Hong Kong. However, the latest fundraising is most likely to further delay NIO’s Hong Kong listing process. With NIO already having $7.5 billion of cash and cash equivalents, restricted cash, and short-term investments on its balance sheet as of Jun 30, 2021, investors are left speculating why another $2 billion would be needed. Further, existing shareholders, who will experience dilutions, are likely to sell their shares in fear of the company’s unknown capital needs.

Toyota Motor (TM - Free Report) confirmed plans of investing more than $13.5 billion through 2030 to develop EV batteries and a battery supply system. This Japan-based auto biggie intends to slash the cost of its batteries by 30% or more. It anticipates achieving this goal by working on the raw materials used in the production of batteries and the way the battery cells are structured. The automaker also plans to optimize the power consumption of these batteries by 30%, starting with its upcoming compact SUV model — Toyota bZ4X. It aims to set up a total of 70 EV battery lines by 2030, capable of producing 200-gigawatt hours of battery power. Toyota targets to sell 8 million partially or fully electrified vehicles by 2030, of which about 2 million will be battery-powered cars and fuel-cell vehicles, while the other 6 million will be gasoline-electric hybrids or plug-in hybrids.

Tesla (TSLA - Free Report) announced a price hike for its Model Y Performance car in China. The EV behemoth has escalated the price of the Performance version of the Made-in-China Tesla Model Y by 10,000 yuan ($1,550) or 2.6%, from 377,900 yuan to 387,900 yuan ($60,192) owing to higher manufacturing costs. Nonetheless, the prices of the two other versions, i.e. the cheaper Standard Range version (introduced in China in July) and the Long Range version remain unaltered, starting from 276,000 yuan and 347,900 yuan, respectively. The Performance version is expected to commence selling in the fourth quarter of this year. Meanwhile, ahead of its debut in India, the test mule of Tesla’s Model Y electric SUV has been spotted testing on the country’s roads. While fans were sure that Tesla’s first product for India will be the Model 3, which has been spotted a couple of times on its roads, the latest testing confirms that Model Y will be the second offering in India.

XPeng Inc. (XPEV - Free Report) unveiled the world’s first intelligent robot horse in a recent product breakthrough.The robot horse can be equipped with a vehicle-level intelligent driving system, which has lidars and external cameras incorporated into it. Although there is a lot of advanced technology behind the robot animal, it has been majorly designed to be mounted by children.As technological advancement gradually makes science fictions a reality, Xpeng’s robotic horse now joins Xiaomi’s Cyberdog in the robotic zoo. These developments suggest that the era of service robots may not be distant future anymore. XPeng currently carries a Zacks Rank #3 (Hold). You can see the complete list of today’s Zacks #1 Rank (Strong Buy) stocks here. 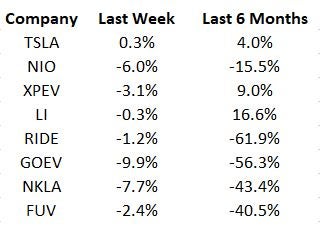 In the past six months, all stocks have decreased, apart from Tesla, XPeng, and Li Auto. Lordstown Motors bore the maximum brunt with shares declining around 62%. In the past week, all stocks but Tesla lost value, with Canoo being the worst performer.

XPeng is set to launch its third production model, named P5 on Wednesday, with deliveries scheduled to commence next month. The P5 model, boasting XPeng’s proprietary XPILOT 3.5 system and Xmart 3.0, is likely to be a game-changer for the company. Deliveries will begin next month. Stay tuned for announcements of upcoming EV models and any important updates from the red-hot industry.