Here's Why Investors Should Invest in Copa Holdings (CPA) Now

Copa Holdings, S.A. (CPA - Free Report) performed well in the past year and has the potential to sustain the momentum. If you haven’t taken advantage of its share price appreciation yet, it’s time you add the stock to your portfolio.

Let’s take a look at the factors that make the stock an attractive pick.

An Outperformer: A glimpse at the company’s price trend reveals that its shares have surged 34.4% in the past year compared with a 14.3% rise of the industry it belongs to. 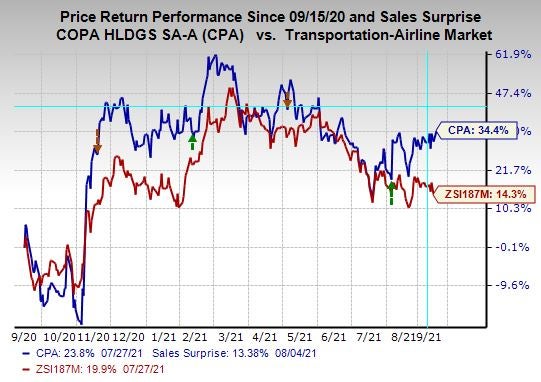 Northward Estimate Revisions: Three estimates for 2021 moved north in the past 60 days versus no southward revision, reflecting analysts’ confidence in the company. The Zacks Consensus Estimate for 2021 bottom line has narrowed from a loss of $3.80 per share to a loss of $2.54.

Strong Growth Prospects: Earnings are expected to register 58.4% and more than 100% growth, for the year 2021 and 2022, respectively. Revenue are also expected to register growth of 74.5% in the current year. The stock’s long-term expected earnings per share (EPS) growth rate is pegged at 10.9%.

Driving Factors:  We are impressed by the carrier’s strong liquidity position. Copa Holdings exited the June-end quarter of 2021 with cash and cash equivalents of $1,182 million, significantly higher than its current debt level of $154 million. This implies that the company has enough cash to meet its short-term debt obligations. The carrier’s total debt to total capital ratio was 0.54 at the end of second-quarter 2021, lower than the previous quarter’s level of 0.56. Lower debt-to-capitalization ratio indicates that the proportion of debt to finance the company’s assets is declining and so is the risk of insolvency.

In the June-end quarter, total operating expenses declined 47.5% from second-quarter 2019 actuals. This can be attributed to a 60.4% decline in fuel expenses arising from reduced fuel consumption (down 55.5% year-over-two-year).

Expenses on passenger servicing declined 70.6% on a year-over-two-year basis. Expenses on wages, salaries and other employee benefits plunged 49.2% in the said time period due to reduced payroll expenses, voluntary temporary leaves and less variable compensation provisions.

Long-term expected earnings per share (three to five years) growth rate for Knight-Swift, Landstar and Herc Holdings is pegged at 15%, 12% and 49.2%, respectively.