Continental Resources, Inc. (CLR - Free Report) appears to be a solid bet for energy investors now, based on strong fundamentals and compelling business prospects. This Oklahoma City, OK-based company is an explorer and producer of oil and natural gas. It operates resources across the East, South, and North United States and has a market capitalization of $14.2 billion.

The company’s shares have popped 36.4% in the past six months compared with an 8% rally of the industry it belongs to. It currently carries a Zacks Rank #1 (Strong Buy) and makes a solid upstream investment choice. You can see the complete list of today’s Zacks #1 Rank stocks here. 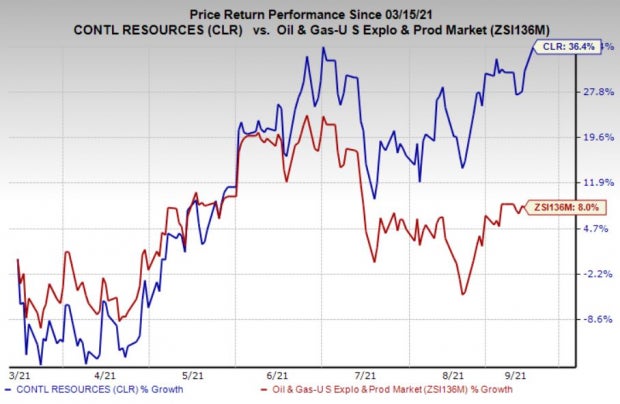 Let's see what the company’s growth drivers are.

The upstream firm boasts a premier position in the Bakken Play, which is ranked among the country’s largest onshore oilfields. It produces premium quality crude oil from the region. The company has adopted several measures to reduce costs in the basin. Around 70% of the cost savings are structural. It expects to decrease well costs this year by 7% year over year.

Continental Resources increased quarterly dividend payment to 15 cents per share from the previous figure of 11 cents. This provides certainty about the financial well-being of the company. Also, it resumed the stock repurchase program of $1 billion, which began in second-quarter 2019. It has already executed $317 million of share repurchases, while $683 million of share repurchase capacity remains available.

It revised its 2021 production expense guidance from $3.25-$3.75 per barrel of oil equivalent to $3-$3.50. Lower unit production cost is likely to boost the company’s profit levels this year.

Earnings estimate revisions have the greatest impact on stock prices. Over the past two months, the stock has witnessed nine upward revisions and no downward movement. The Zacks Consensus Estimate for Continental Resources’ earnings for the current year is pegged at $3.93 per share, indicating a massive improvement from the year-ago period’s loss of $1.17. The company outpaced the Zacks Consensus Estimate thrice in the trailing four quarters.

The Zacks Consensus Estimate for Cimarex’s earnings for 2021 is pegged at $8.88 per share, signaling a major improvement from the year-ago figure of $1.39.

The consensus estimate for Devon Energy’s bottom line for 2021 is pegged at $2.78 per share, indicating a massive improvement from the year-ago figure of 9 cents.

The consensus estimate for Comstock Resources’ earnings for 2021 is pegged at $1.10 per share, indicating a major increase from the year-ago figure of 23 cents.

Reasons to Add California Water (CWT) to Your Portfolio Now