Per the Corpus Christi Upper Bay Reach Channel Improvement Project, Great Lakes will increase the channel depth of Upper Bay Reach to 54 feet from 47 feet and widen the channel to 530 feet, with an additional 400 feet of barge lanes. The project will enable the Port of Corpus Christi to accommodate larger vehicles, including two-way traffic during high traffic periods. The company has already completed the first phase of this four-phase Corpus Christi deepening project in March 2020. The U.S. Army Corps of Engineers, Galveston District, has valued this project at $151.9 million, including a base award of $139 million, with open options remaining to be awarded of $12.9 million. The project is anticipated to begin in fourth-quarter 2021 and be completed in first-quarter 2023.

Work on the Fire Island Inlet to Montauk Point Beach Project — which was awarded from the U.S. Army Corps of Engineers, New York District — consists of dredging of the Fire Island Inlet and beneficial use of dredge material for sand placement at Gilgo Beach and Robert Moses State Park. This will improve shoreline protection from damaging storms, and help inlet navigation for the Coast Guard and the public. The contract work will begin in fourth-quarter 2021 and is likely to be completed in first-quarter 2022.

The third project named Thimble Shoal East Deepening Project was awarded from the Virginia Port Authority and is expected to commence in next spring, with estimated completion in August 2022. The work involves dredging portions of the Thimble Shoal Federal Navigation Channel, effective usage of dredged material for beach nourishment at the Ocean View Beach, Norfolk and Ocean Park, Virginia Beach.

The Mississippi River, Baton Rouge to Gulf of Mexico, Southwest Pass Hopper Dredge Rental Project — awarded from the U.S. Army Corps of Engineers, New Orleans District, in the second quarter — will enable Great Lakes to furnish a fully crewed and equipped self-propelled trailing suction hopper dredge to maintain work in the Mississippi River Southwest Pass and Calcasieu River. The project is likely to start in the fourth quarter and is expected to end in the first quarter of next year.

The last award, namely the Cape May Inlet Beach Renourishment Project, is expected to commence in the third quarter, with estimated completion before year-end. The work entails the placement of sand from a designated borrow area onto two beach locations at the Cape May Inlet. This project was awarded from the U.S. Army Corps of Engineers, Philadelphia District.

David Simonelli, Great Lakes’ chief operating officer, said, “Great Lakes is pleased to add these projects to our backlog of deepening, coastal protection, and maintenance dredging projects that will contribute to our 2021 performance and position us well for 2022.” 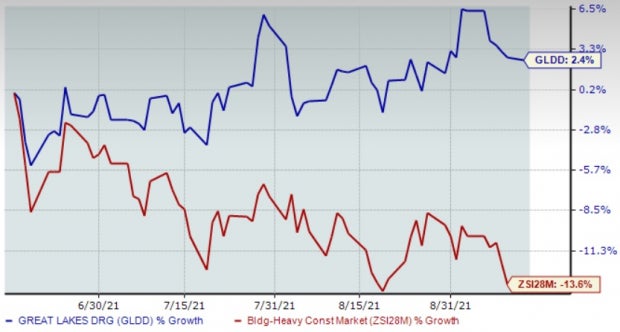 Shares of this Zacks Rank #5 (Strong Sell) company have significantly outperformed the industry in the past three months. Its shares grew 2.4% in the said period against the industry’s 13.6% fall.

In May, it was awarded several major dredging works in Alabama, Louisiana, Florida, Arkansas, Kentucky, Mississippi, Missouri and Tennessee. These contracts, which incorporate deepening, coastal protection and maintenance dredging work, are valued at $112.8 million.

We believe the company’s strong bidding ability, and project execution will boost its performance in 2021 and beyond. The Zacks Consensus Estimate for third-quarter 2021 earnings is currently pegged at 29 cents, indicating a 52.6% year-over-year improvement.