Celldex Therapeutics, Inc. (CLDX - Free Report) announced that it has initiated dosing in the first cohort of a phase I study evaluating a subcutaneous formulation of its monoclonal antibody candidate, CDX-0159. The company intends to evaluate the subcutaneous CDX-0159 as a potential treatment for a skin disorder, chronic urticarias, in a phase II study, which is likely to start in the first half of 2022.

The early-stage has been designed with four cohorts to evaluate four doses — 50 mg, 150 mg, 300 mg, and 600 mg — of the subcutaneous CDX-0159 in healthy volunteers primarily for safety and tolerability. The study’s secondary endpoints include pharmacokinetics, pharmacodynamics, and immunogenicity.

We note that Celldex is already evaluating an intravenous formulation of CDX-0159 in multiple early-stage studies as a potential treatment of skin disorders — chronic spontaneous and chronic inducible urticarias. The company also plans to start a phase I study later this year to evaluate the intravenous CDX-0159 for treating prurigo nodularis, another skin disorder.

Shares of Celldex have rallied 208.6% so far this year compared with the industry’s increase of 0.8%. 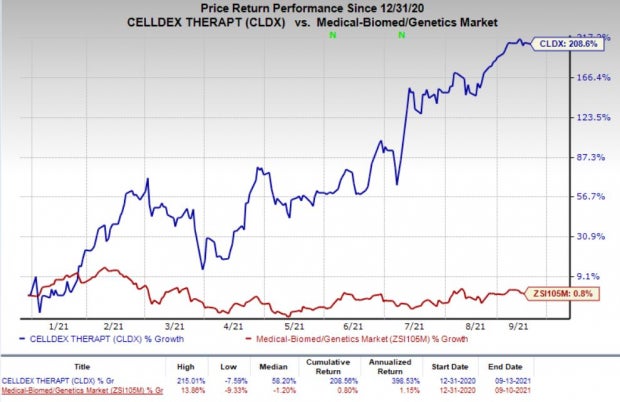 Apart from CDX-0159, Celldex is developing a CD40 human agonist antibody CDX-1140. The candidate is being developed as a potential treatment of solid tumors and B cell lymphomas as a monotherapy or in combination with Celldex’s CDX-301 or Merck’s (MRK - Free Report) Keytruda.

The company initiated an early-stage study earlier this year to evaluate its new bispecific product candidate, CDX-527 for solid tumors.