Live Nation Entertainment, Inc. (LYV - Free Report) recently resumed its previously announced acquisition of OCESA Entretenimiento, a Mexican entertainment company, in which broadcaster Televisa has a 40% stake. The deal is valued at nearly $444 million. Following the news, the stock gained 3.5% on Sep 13. Shares of the company have surged 51.4% in the past year, compared with the industry’s rally of 36.6%.

This acquisition, which was earlier announced in July 2019, was stopped due to the coronavirus pandemic. The company anticipates to seal the acquisition by late 2021 or early 2022. However, the deal is subject to regulatory approvals. During the prior negotiations, the deal had received a green signal from the regulatory bodies.

Michael Rapino, president and CEO, Live Nation Entertainment said, “After serving as Live Nation's touring, festival, and ticketing partner in Mexico for years, we know OCESA is a stellar business with deep roots in live entertainment in Mexico.”

OCESA has a strong presence in Latin America. Prior to the pandemic, the company promoted more than 3,100 events for nearly 6 million fans across Mexico and Colombia. It has a strong business portfolio in ticketing, sponsorship, food & beverage, merchandise, and venue operation.  The company has 13 premier venues across Mexico.

The company promotes concerts for famous artists like Coldplay, Paul McCartney, and U2. With the reopening of Mexico, it has a robust lineup of events for the rest of 2021. OCESA's primary ticketing business, Ticketmaster Mexico, sells nearly 20 million tickets annually.

This acquisition will bolster Live Nation’s fan base. In August, 8 million fans attended Live Nation events. The company is very optimistic about reaching the August figure in September as well. 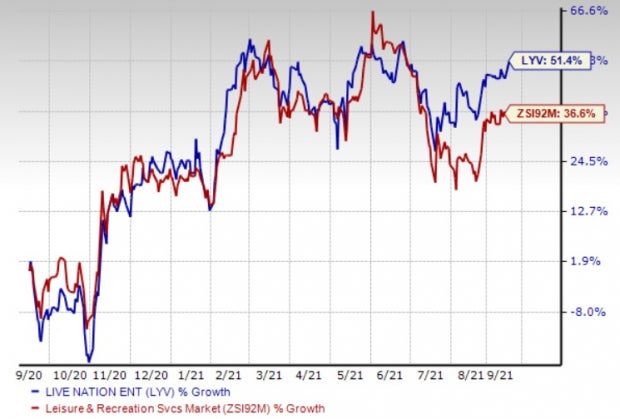 Live Nation is optimistic about growth in 2022 and 2023. Robust fan engagement is likely to continue into 2022 and 2023, as arenas, amphitheaters, and stadiums are likely to witness double-digit growth in its show count and ticket sales relative to 2019 levels. The company is so confident about its prospects that it is extending planning into 2023. The company has sold more than 25 million tickets for shows during the second half of 2021. For 2022, it has already sold 14 million tickets, resulting in $2.1 billion of event related deferred revenues.