Valued at $66.5 million, the contract has been awarded by the Naval Air Systems Command, Patuxent River, MD. Per the terms, Pratt & Whitney will provide funding for one Short Take-Off/Vertical Landing (STOVL) and one Conventional Take-Off and Landing Block 4 developmental engine.

The majority of the work related to this deal will be executed in East Hartford, CT. The entire contract can be expected to get completed in December 2022.

Over the past decade, a rapid rise in global terrorism and adverse geopolitical situations across borders has boosted demand for defense products, with combat aircraft constituting a major portion of that portfolio. To this end, it is imperative to mention that F-35 jets built by America’s largest defense contractor, Lockheed Martin (LMT - Free Report) , enjoy quite a dominant position in the combat jet market. F-35 is one of the top-notch stealth aircraft.

In particular, Pratt and Whitney, a world leader in the design and manufacture of next- generation propulsion technology, supplies the F135 engine that powers all three variants of the F-35 fighter jets.

Therefore, as the F-35 jet continues to dominate the combat aircraft market, Pratt & Whitney stands to benefit in the form of order flow involving its propulsion systems. The latest contract win is a bright example of that.

F-35 has been a major growth driver for Pratt and Whitney. In the second quarter of 2021, Raytheon Technologies’ adjusted sales at the Pratt and Whitney unit witnessed 19% year over year growth, with F-35 being one of the key top-line contributors.

The production of F-35 jets is expected to continue for many years, given the U.S. government's current inventory target of 2,456 aircraft for the Air Force, Marine Corps. and Navy. Consequently, we expect Pratt and Whitney to witness more order inflows for supplying and maintenance of F-35’s propulsion system, like the latest one, which in turn should bolster Raytheon Technologies’ top line.

Shares of this Zacks Rank #3 (Hold) company have gained 31.5% in the past year compared with the industry’s rally of 27.1%. You can see the complete list of today’s Zacks #1 Rank (Strong Buy) stocks here. 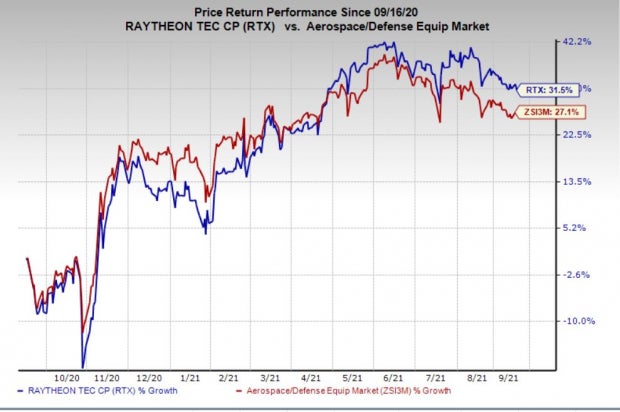