With the Delta-variant of COVID-19 spreading very fast in the United States, the past week saw airline majors in the country like Delta Air Lines (DAL - Free Report) and United Airlines (UAL - Free Report) taper their respective outlooks for the September quarter. The third-quarter reporting cycle in the airline space will be kickstarted by Delta on Oct 13.

Apart from the update pertaining to the impact of the Delta variant on its operations, Southwest Airlines (LUV - Free Report) was also in the news when it announced that Mike Van de Ven replaced Tom Nealon as its president. Copa Holdings (CPA - Free Report) announced its traffic statistics for August. Fellow Latin American carriers, namely Gol Linhas (GOL - Free Report) and Azul (AZUL - Free Report) also reported their respective August traffic numbers, as reported in the previous week’s write up.

1. Delta’s management stated that due to the rising COVID-19 cases in the second half of the third quarter, total adjusted revenues are likely to be at the lower end of its previous guided range. Previously, the metric was estimated to decline in the 30-35% band from the third-quarter 2019 levels. Capacity is still expected to drop in the 28-30% range from the third-quarter 2019 actuals. Delta now expects non-fuel unit costs to increase roughly 15% in the September quarter (earlier guidance was an increase in the 11-14% range). The increased guidance is due to higher staffing costs and employee-related expenses following the Delta-variant spread. Fuel price per gallon is now expected in the $1.96-$2 band (past view: $2.05-$2.15).

2. Due to the Delta variant-induced bookings and yield softness, United Airlines’ management now expects total revenues for the third quarter of 2021 to plunge approximately 33% from the third-quarter 2019 reading. To match the subdued-demand scenario, the Chicago-based carrier is trimming capacity. The airline currently anticipates its September-quarter capacity to be down at least 28% from the third-quarter 2019 actuals. This compares unfavorably with the previous guidance of 26% capacity contraction from the third-quarter 2019 levels. Due to weakness in bookings, United Airlines, currently carrying a Zacks Rank #3 (Hold), now anticipates posting an adjusted pretax loss for the September quarter (against the earlier forecast of an $82-million adjusted pretax income). In fact, the carrier might incur an adjusted pretax loss in the December quarter as well if the current woes persist.

3. JetBlue Airways (JBLU - Free Report) also trimmed its third-quarter capacity projection in response to tepid demand as bookings are softer than anticipated. JetBlue management now expects flown capacity to slip approximately 1% from the third-quarter 2019 actuals (earlier guidance was to be either flat or decline up to 3%). With the Delta variant inducing modest bookings and higher cancellations, revenues are now likely to decline in the 6-9% band (earlier guidance had called for a revenue decline in the 4-9% range). The September-quarter EBITDA is now expected in the $75-$125 million range, narrowed from the earlier band of $75-$175 million.

4. Southwest Airlines’ management now expects third-quarter 2021 operating revenues to decrease in the 18-20% range from the third-quarter 2019 actuals (former view was a 15-20% decline). Due to this weakness, operating revenues for September are now expected to drop in the 25-30% band from the earlier expectation of a 15-25% decline compared with the third-quarter 2019 reading. Operating revenues for October are expected to decline between 20% and 30%. Apart from the Delta-variant woes, Hurricane Ida disrupted operations. As a result, the company currently expects to cancel nearly 2,700 flights in the third quarter of 2021 due to which it slashes its September-quarter capacity estimate by approximately one point from its previous forecast.

5. Traffic at Copa Holdings declined 35.2% in August 2021 from the comparable period’s level in 2019. Thanks to this soft demand, capacity fell 30.6% from the 2019 level. With traffic declining more than the amount of capacity contraction, load factor (percentage of seats filled with passengers) deteriorated 570 basis points to 79.6% in August. 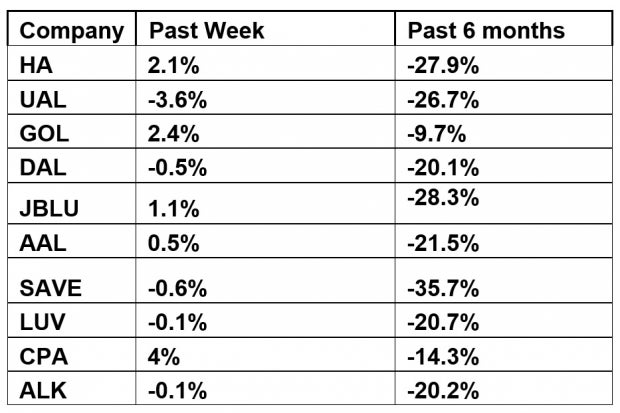 The table above shows that the airline stocks have exhibited a mixed trend with respect to price over the past week. The NYSE ARCA Airline Index has increased marginally over the past week to $90.31. Over the course of six months, the sector tracker has decreased 19.1%.

Further updates on the impact of the Delta-variant spread on the operations of carriers are likely to be available in the coming days.