ArcelorMittal (MT) to Ramp Up Iron Ore Output in Liberia

ArcelorMittal (MT - Free Report) and the Government of the Republic of Liberia recently signed an amendment to the Mineral Development Agreement (MDA), paving the way for the expansion of ArcelorMittal’s mining and logistics operations in the country.

The purview of the project includes processing, rail and port facilities. It also includes the construction of a new concentration plant and the substantial expansion of mining operations, with the first concentrate expected in late 2023, expected to increase capacity up to 15 million tons annually. The agreement allows the company to have reservation for expansion by at least up to 30 million tons and there is investment provision in additional rail capacity for other users. The project, one of the largest in mining in West Africa, needs a capital requirement of roughly $0.8 billion, as it is effectively a brownfield expansion.

With the amendment in effect, the Liberia wing of ArcelorMittal will significantly ramp up production of premium iron ore and usher in economic benefits for Liberia. It is expected to generate more than 2000 jobs during the construction phase, where Liberians will have the scope of filling up the majority of the positions created. The company’s Liberia arm has also launched an extensive training and development program for high potential Liberian employees who will gain hands-on experience in the company’s global mining operations.

The heavy investments in advanced skills training demonstrate the company’s dedication to work toward the economic betterment of the nation.

In addition, the company envisions that the expansion will have a trickle-down effect, fostering the growth of small-and-medium-sized businesses in Liberia which offer a range of services to ArcelorMittal Liberia.

Shares of ArcelorMittal have surged 167.4% in a year, outperforming the industry’s rise of 113.9%. Its expected earnings growth rate for the current year is a whopping 1,731.2%. 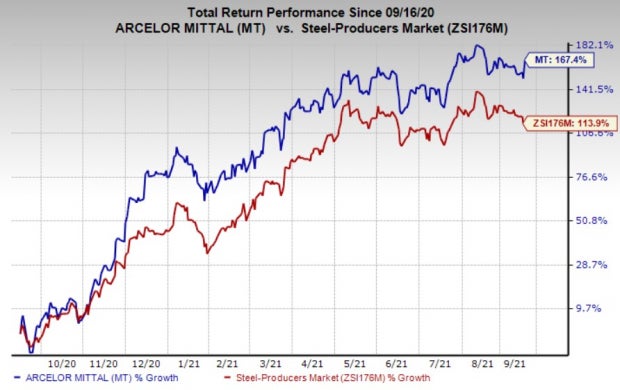 In its last-quarter earnings call, ArcelorMittal raised its outlook for global apparent steel consumption (ASC) for 2021 as it expects demand to improve further in the second half of the year. It now envisions ASC to increase in the range of 7.5-8.5% for 2021, up from its earlier expected growth of 4.5-5.5%. It noted that a favorable supply demand balance and a low inventory environment are supporting higher utilization levels and healthy steel spreads.

Nucor has a projected earnings growth rate of 478.7% for the current year. The company’s shares have jumped 136.5% in a year.

Aperam has a projected earnings growth rate of 429.8% for the current year. The company’s shares have appreciated 117.5% over the past year.

Olympic Steel has a projected earnings growth rate of 2,362.2% for the current year. The company’s shares have surged 116.5% in a year.