Theravance Biopharma, Inc. (TBPH - Free Report) announced that a phase III study evaluating its investigational pipeline candidate, ampreloxetine, for the treatment of symptomatic neurogenic orthostatic hypotension (nOH) did not show an improvement in OHSA #1 in patients, which was its primary endpoint. The double-blind, placebo-controlled study was evaluating the safety and efficacy of ampreloxetine versus placebo in patients with symptomatic nOH.

Following the study’s failure, the company announced a major cost-reduction program and undertook strategic actions to prioritize marketed and investigational respiratory therapeutics in order to maximize shareholder value in the long run.

Theravance is looking to reduce its workforce by 75%, an estimated 270 job cuts. 75% of this reduction is likely to be completed in November 2021 and the rest is to be completed by February next year.

Shares of Theravance were down 15.8% on Wednesday following the announcement of the news. In fact, the stock has plunged 61.9% so far this year compared with the industry’s decrease of 12.1%. 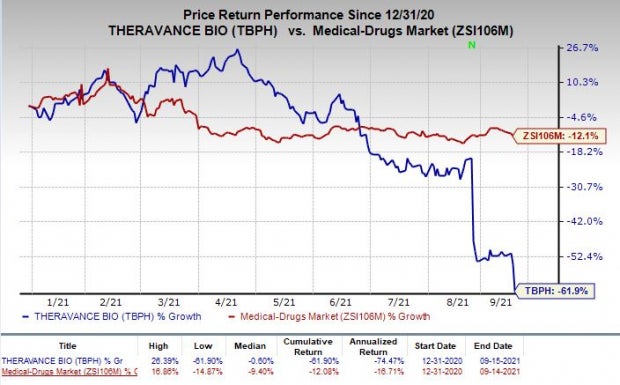 With this strategic implementation, Theravance is looking to make annualized cost savings of approximately $165 million in 2022. The company also updated its guidance for operating expenses it had provided earlier this year.

Theravance also provided its preliminary guidance for operating expenses for 2022. Preliminary R&D expenses are estimated to be $55–$65 million, while preliminary SG&A expenses are expected to be $30–$40 million. The company expects to become sustainably cash flow positive, beginning in the second half of 2022.

Additionally, Theravance is looking to focus on its core respiratory assets – to begin a study in partnership with Viatris Inc. (VTRS - Free Report) for the label expansion of Yupelri and developing its most advanced clinical candidate, nezulcitinib, for treating acute lung injury.

The past few months have been tough for Theravance as the company faced some major pipeline setbacks. In June, the company had announced that its inhaled JAK-inhibitor candidate, nezulcitinib, failed to meet its primary endpoint in hospitalized COVID-19 patients with lung injury.

Theravance is also developing an oral JAK-inhibitor candidate, izencitinib, for inflammatory intestinal diseases, in collaboration with Janssen Biotech, a subsidiary of J&J (JNJ - Free Report) . In August, the company announced that a phase IIb study evaluating izencitinib as a potential treatment for patients with ulcerative colitis failed to meet its primary endpoints.

With the new strategic implementation, Theravance is looking to close out the phase II study on izencitinib for treating Crohn's disease as well as the phase III REDWOOD study on ampreloxetine for symptomatic nOH. The company has also decided to reduce the size of its board with the resignation of two of its directors.