Raven Industries, Inc. announced an update on its deal with CNH Industrial N.V. (CNHI - Free Report) , signed in June 2021. The transaction was green lighted by the company’s shareholders at a special meeting held yesterday.

Raven is based in Sioux Falls, SD and is one of the leading companies engaged in providing precision agriculture technology. It has three divisions, namely Aerostar, Engineered Films and Applied Technology. Its revenues totaled $348.4 million in the 12 months ended Jan 31, 2021.

The deal was approved by 99% of the nearly 71% of Raven’s stakeholders that voted at the special meeting. The completion of the transaction is expected in the fourth quarter of 2021 after receiving necessary approvals from the Defense Counterintelligence and Security Agency (DCSA) and the Committee on Foreign Investment in the United States (CFIUS).

A brief discussion on the signed agreement is provided below:

The deal inked between the parties calls for the buyout of Raven by CNH Industrial. The transaction was valued at $58 per share or $2.1 billion enterprise value and will be funded by CNH Industrial with available cash.

The transaction is expected to enhance Raven’s capabilities in the agriculture technology space and boost its shareholder value. CNH Industrial plans to take a strategic review of Aerostar and Engineered Films divisions after the transaction is over. While Aerostar is a leader in the stratospheric platform industry, Engineered Films is well-known in the performance specialty films industry. The review will help boost the capabilities of both divisions and enhance shareholder value.

By calendar year 2025, the Raven-CNH Industrial transaction is anticipated to generate revenues (run-rate) worth $400 million. Incremental earnings before interest, tax, depreciation and amortization are expected to be $150 million.

With a market capitalization of $2.1 billion, Raven currently sports a Zacks Rank #1 (Strong Buy). In the past three months, shares of the company have surged 41.2% compared with the industry’s growth of 7.3%. 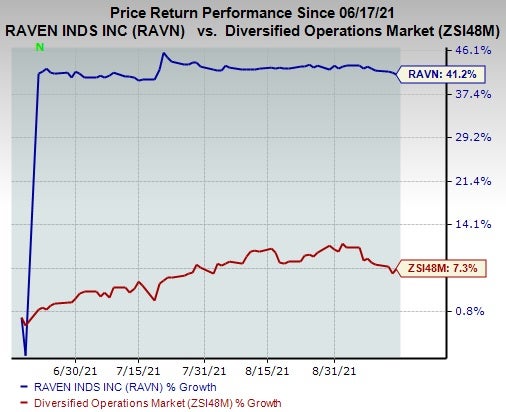 Two other top-ranked stocks in the industry are Crane Co. (CR - Free Report) and Danaher Corporation (DHR - Free Report) , both carrying a Zacks Rank #2 (Buy) at present. You can see the complete list of today’s Zacks #1 Rank stocks here.

In the past 60 days, earnings estimates of the above-mentioned companies improved for the current year. Also, the earnings surprise for the last reported quarter was 31.65% for Crane and 20.59% for Danaher.

Why It is Worth Betting on Royal Dutch Shell (RDS.A) Now