At its environment-themed presentation titled Energy Transition Spotlight on Tuesday, Chevron (CVX - Free Report) said that it will invest 200% more in lower-carbon businesses in the next seven years but stopped short of committing any timeline toward achieving net-zero operations.

With the rise of ESG (Environmental, Social and Governance) investing and a broad-based transition toward clean energy, the U.S. oil major broke down its future shift toward an environmentally friendly direction.

Chevron set clear targets to ramp up renewable natural gas output to 40,000 million British thermal units (MMBtu) per day by 2030, while growing hydrogen production to 150,000 tons annually. Besides, the company is rapidly expanding its renewable fuels footprint with daily production capacity estimated to reach 100,000 barrels by the end of this decade, in addition to increasing carbon offsets to 25 million tons per year.

The No. 2 energy company in the United States behind ExxonMobil (XOM - Free Report) repeated its pledge to cut carbon intensity by 35% within 2028 relative to 2016.

As part of this plan, the American energy giant will invest $10 billion in clean energy through 2028, more than triple the $3 billion earmarked earlier. Of the total, an outlay of $3 billion each will be spent on renewable fuels and carbon capture/storage/offsets, $2 billion on hydrogen, while $2 billion is planned to reduce the emissions intensity of the company’s portfolio.

The San Ramon, CA-based company reiterated its guidance to increase return on capital employed to 10% or higher by 2025 and generate about $25 billion free cash flow in the five-year period, assuming a Brent oil price of $60 per barrel.

Chevron’s “pathway to net zero” goal notwithstanding, some analysts were disappointed not to find any explicit strategy from the supermajor to become a net zero emitter of greenhouse gases by 2050. Most of its European and Canadian peers including BP plc (BP - Free Report) , Royal Dutch Shell (RDS.A - Free Report) , Equinor and Suncor Energy have outlined specific commitments to offset all carbon (and other greenhouse gas, or GHG) emissions by the middle of this century.

On its part, Chevron has sealed a number of deals in the last couple of weeks to invest in hydrogen, green jet fuel and renewable natural gas, as the Zacks Rank #2 (Buy) firm tries to be on the right side of the market’s growing recognition of corporate ESG credentials. At the same time, the only energy component of the Dow Jones Industrial Average maintains that it won’t compromise with shareholder returns by saying that it will continue to increase its dividend and buy back shares.

While the Chevron stock has largely underperformed the industry year to date (+15.2% versus +27.7%), we believe that the company is trending toward the right direction, which will help its shares to catch up. 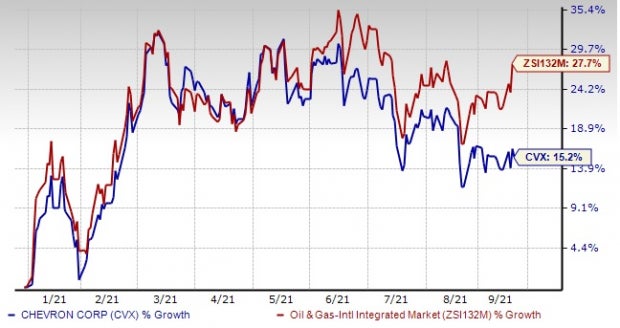