United States Steel Corporation (X - Free Report) recently announced its guidance for third-quarter 2021. The company’s adjusted EBITDA is projected to be around $2 billion, which suggests an increase from the second quarter’s figure of roughly $1.3 billion. U.S. Steel stated that it expects to achieve record figures in the third quarter. Quarterly adjusted EBITDA and EBITDA margins will be driven by its Best for All business model, strong reliability and quality performance, persistent customer demand as well as sustained rise in steel selling prices.

The company reduced its debt by roughly $2.7 billion year to date, excluding the impact of the debt assumed in connection with the Big River Steel acquisition. Its deleveraging efforts so far have effectively cut down its annual run-rate interest expenses by approximately $185 million, while extending its maturity profile. It intends to redeem $180 million of the 6.625% Big River Steel Senior Secured Notes due 2029 and $370 million of the 6.25% U. S. Steel Senior Notes due 2026.

The Flat-rolled segment is projected to deliver record EBITDA and EBITDA margin in the third quarter led by the increased flow-through of higher steel selling prices into its adjusted contracts, spot selling prices and continued strong customer demand. The segment’s assets continue to perform well, creating efficiencies across the segment and increasing the segment’s profitability.

In the Mini Mill segment, third-quarter EBITDA and EBITDA margin are expected to beat last quarter’s records on the back of higher steel selling prices and ongoing operating efficiencies.

The European segment is also projected to deliver record EBITDA and EBITDA margin driven by strong steel demand and higher steel prices. The Tubular segment is expected to benefit from higher prices as well as volumes, which will help negate the impact of inflated scrap input costs.

U.S. Steel anticipates fundamentals in the steel market to remain favorable. It has accelerated the pace of deleveraging to clear the path to its transition to the Best for All future faster, the company noted. 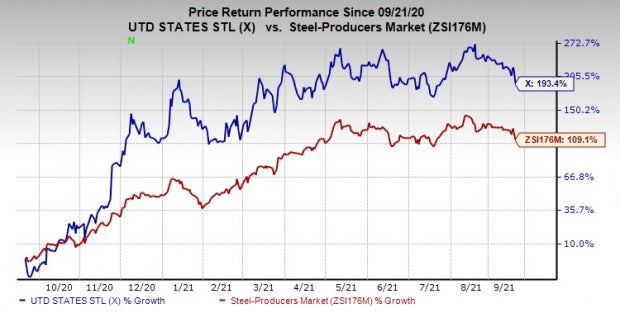 Nucor has a projected earnings growth rate of around 508% for the current year. The company’s shares have soared 129% in a year. It currently sports a Zacks Rank #1. You can see the complete list of today’s Zacks #1 Rank stocks here.

Chemours has an expected earnings growth rate of around 86.4% for the current year. The company’s shares have gained 44.5% in the past year. It currently carries a Zacks Rank #2 (Buy).

Olin has an expected earnings growth rate of around 639.3% for the current fiscal. The company’s shares have surged 274.4% in the past year. It currently carries a Zacks Rank #2.