Pebblebrook Hotel Trust (PEB - Free Report) has issued an update on the third-quarter 2021 operating trend. Although the company witnessed weekly improvements in operating trends through early August, there has been a slowdown in overall demand in the recent weeks.

The company expects September to be weaker than August, with the seasonal slowdown in leisure transient travel and a negative impact on the pace of the business travel recovery, seasonal factors and increasing cases of the Delta variant.

While the hotel REIT’s total portfolio revenue per available room was flat for the weekend starting Sep 10 to 2019’s Labor Day weekend, its resorts achieved an average rate that was 57% higher than 2019.

With the completion of its sale of 189-room Villa Florence San Francisco on the Union Square, Pebblebrook has a total liquidity of roughly $965 million, including cash on hand of nearly $320 million, with $644.2 million available on the company’s $650-million credit facility. It also has no loans maturing until the fourth quarter of 2022. Hence, the company has ample flexibility to pursue opportunistic acquisitions. In July, Pebblebrook closed the acquisition of the 200-room Jekyll Island Club Resort in Jekyll Island, GA for $94 million.

Shares of this Zacks Rank #3 (Hold) company have declined 4.4% over the past three months, underperforming the industry’s growth of 1.2%. 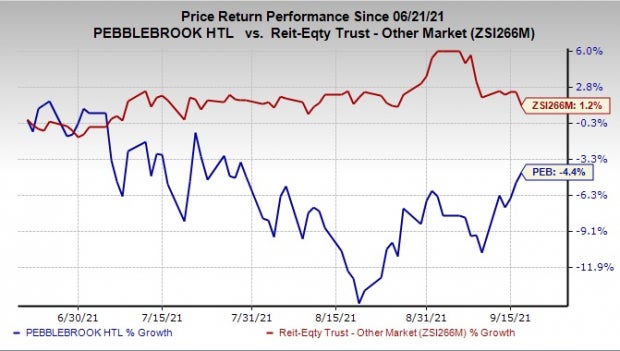 The Zacks Consensus Estimate for Alexander & Baldwin Holdings, Inc.’s (ALEX - Free Report) ongoing-year FFO per share has been revised 32.4% upward over the past two months. The company carries a Zacks Rank of 2 (Buy), currently. You can see the complete list of today’s Zacks #1 Rank (Strong Buy) stocks here.

The Zacks Consensus Estimate for CubeSmart’s (CUBE - Free Report) 2021 FFO per share has moved marginally upward over the past month. The company currently carries a Zacks Rank of 2.

The Zacks Consensus Estimate for Extra Space Storage Inc.’s (EXR - Free Report) current-year FFO per share has moved marginally north in the past 30 days. The company carries a Zacks Rank of 2, at present.