PerkinElmer (PKI) to Benefit From BioLegend Buyout: Here's How

PerkinElmer, Inc. (PKI - Free Report) recently completed its buyout of BioLegend for a total consideration of approximately $5.25 billion. The latest buyout, which is historically the largest for the company, is expected to further expand its life science business into high-growth areas like cytometry, proteogenomics, multiplex assays, recombinant proteins, magnetic cell separation and bioprocessing.

PerkinElmer’s latest takeover is expected to significantly solidify its position in the global life science space. The company's life science business is a component of its broader Discovery & Analytical Solutions segment.

Per PerkinElmer’s management, the latest buyout is expected to play a crucial role in the combined companies’ ability to offer new and ingenious solutions to scientists, thereby driving novel therapeutic discovery and development. Further, BioLegend is likely to substantially boost PerkinElmer’s reagents portfolio post the buyout.

Following the takeover, BioLegend is expected to contribute an incremental $380 million in revenues and adjusted earnings of 30 cents per share accretion to PerkinElmer in fiscal year 2022. Additional information regarding its expected financial contribution to the remainder of the current fiscal year will be provided on PerkinElmer’s upcoming third-quarter 2021 earnings call.

Per a report by Persistence Market Research, the global life science products market was estimated to be valued at more than $2,500 million in 2015 and is anticipated to grow to approximately $4,200 million by 2024-end at a CAGR of 4.3%. Factors like growing investments in research and development in the life sciences domain, and demand for high-quality products and tools for research are likely to drive the market.

Given the market potential, the buyout is likely to significantly boost PerkinElmer’s global business.

PerkinElmer has witnessed a few notable developments across its business over the past few months.

The company, in July, announced four new ready-to-use AlphaLISA KRAS kits designed to aid scientists to better understand complex KRAS protein structures and mutations so they can more easily, quickly and precisely identify potential new therapeutic candidates for a wide range of prevalent cancers. Researchers will now be able to choose between PerkinElmer’s HTRF and AlphaLISA assays to use the best methods for their individual labs.

Also in July, the company reported robust second-quarter 2021 results, where it registered strength in the overall top line and segmental performances. 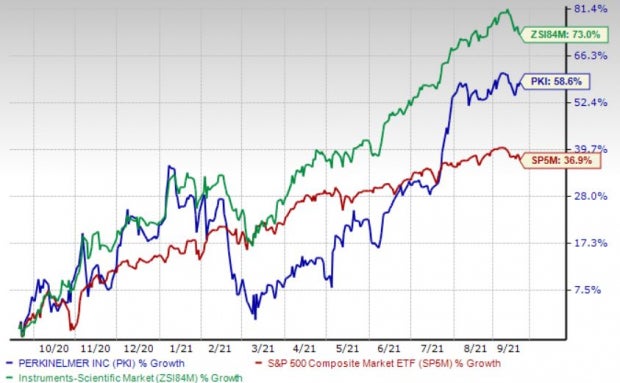 IDEXX’s long-term earnings growth rate is estimated to be 19.9%. It currently has a Zacks Rank #2.

Intuitive Surgical’s long-term earnings growth rate is estimated to be 9.7%. It currently flaunts a Zacks Rank #1.

Rite Aid (RAD) to Report Q2 Earnings: What Should You Know?