The Progressive Corporation (PGR - Free Report) reported loss per share of 2 cents for August 2021, comparing unfavorably with earnings of 83 cents in the year-ago comparable period. Increase in expenses offset rise in revenues, inducing loss in the month.

Progressive’s shares have lost 6.3% year to date, compared with the industry’s growth of 15.7%. 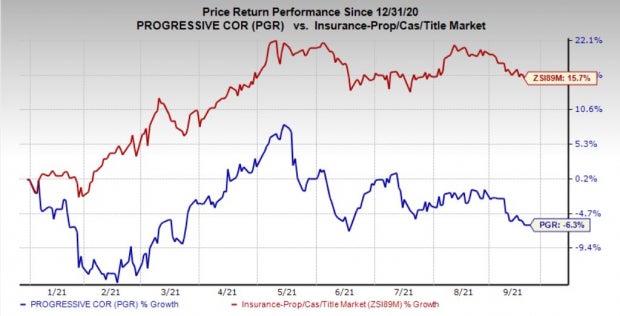 Combined ratio — percentage of premiums paid out as claims and expenses — deteriorated 1270 basis points (bps) year over year to 105.3.

Total expenses rose 28.9% to $3.8 billion, primarily on account of 37.8 higher losses and loss adjustment expenses, and 13.7% rise in other underwriting expenses.

In August, policies in force were impressive for both Vehicle and Property businesses. In its Vehicle business, the Personal Auto segment improved 9% year over year to 22.9 million. Special Lines increased 8% from the year-earlier month to 5.3 million policies.

Progressive’s Commercial Auto segment rose 18% year over year to 0.9 million. The Property business had 2.7 million policies in force in the reported month, up 13% year over year.

American Financial Group delivered an earnings surprise of 45.73% in the last reported quarter.

Cincinnati Financial delivered an earnings surprise of 80.81% in the last reported quarter.

Everest Re Group delivered an earnings surprise of 62.56% in the last reported quarter.