The deal enables Lincoln National to reinsure in-force executive benefit and universal life reserves of roughly $9.4 billion. Besides, Lincoln Financial will continue to execute account administration and recordkeeping of the policies as part of the reinsurance agreement.

Thus, the recent deal is expected to produce capital worth around $1.2 billion. The transaction proceeds will be utilized to pursue $900 million of incremental share buybacks by the first-quarter 2022. With the leftover proceeds, the company intends to primarily pay off debts.

The transaction is likely to be roughly 5% accretive to the adjusted operating earnings per share as well as boost return on equity in 2022.

The latest move highlights the importance of reinsurance agreements for most insurers whose operations remain susceptible to natural disasters or other severe events. In such a deal, a reinsurer agrees to pay a specific portion of the claims reported against an insurance company, which in return pays a reinsurance premium.  Claims made can often result in drainage of cash reserves for an insurer, which might hurt its financial health. Amid such a situation, a reinsurer can come to its rescue by sharing a particular portion of risks paving the way for reduced degree of losses suffered, efficient claims management and better underwriting results for insurance companies.

The deal is also in sync with Lincoln National's commitment to return value to shareholders through share buybacks. It has been a regular dividend paying company. In fact, the company approved a 5% hike in its quarterly dividend last year.

The move is a testament to Lincoln National’s prudence in reducing the high level of debt burden that the company usually grapples with. It has even resorted to issuing senior notes amid a low interest rate environment triggered by the COVID-19 pandemic. The notes offering is aimed at procuring funds and enhancing financial flexibility without affecting liquidity. The company boasts of a strong cash balance, which as of Jun 30, 2021, rose nearly 40% from the 2020-end level.

While Lincoln National remains keen on pursuing shareholder-friendly moves, it concurrently aims to bolster its core Life Insurance business through new business generation, strong retention rates, product introductions and upgradations of the existing ones. The company is remodeling its business structure as a result of which it has divested less profitable or underperforming units. All these initiatives put the company on track to achieve its long-term growth target of 8-10%.

Shares of Lincoln National, which carries a Zacks Rank #2 (Buy), have soared 114.2% in a year compared with the industry’s growth of 8.8%. 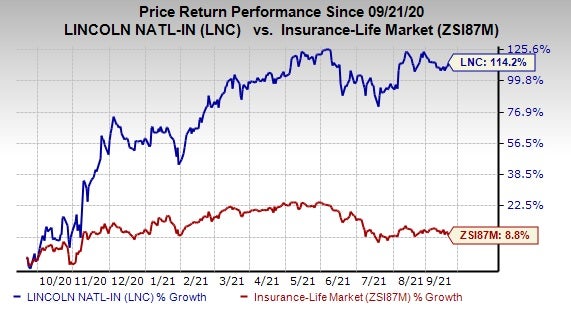 Brighthouse Financial, Athene Holding and Voya Financial have a trailing four-quarter earnings surprise of 52.23, 47.78% and 9.13%, on average, respectively.