Valued at $1.62 billion, the contract is projected to be completed by Sep 27, 2039. Per the terms, Boeing will conduct repair of the ICBM guidance set.

Work related to this deal will be carried out in Newark, OH.

A Note on Minuteman III ICBM

Boeing’s Minuteman III ICBM is a strategic weapon system that uses a ballistic missile of intercontinental range. It is being used by the U.S. Air Force Combat Command, which is a vital component of the U.S. strategic deterrent forces.

Increasing geopolitical tensions across the globe have prompted nations to strengthen their defense arsenal with technologically advanced ballistic missile systems. With these significant advancements, missile defense has steadily emerged to play a pivotal role in a nation’s defense strategy. To this end, the Boeing Defense, Space & Security (BDS) segment has been clinching frequent awards from the United States as well as international customers.

The BDS segment recorded second-quarter 2021 net sales of $6.88 billion, reflecting a 4% improvement from the year-ago quarter. Considering this, we may expect notable contracts like the latest one to instill further growth in this segment.

Meanwhile, the fiscal 2022 defense budget has provisioned for investments worth $20.4 billion for U.S. Missile Defense Programs. This in turn should boost Boeing’s top line in the coming days and make this jet giant a successful missile-maker.

Per Mordor Intelligence, the missiles and missile defense systems market is estimated to register a CAGR of more than 10% between 2020 and 2025. With North America being one of the forerunners in this market, such projections bolster growth opportunities for major U.S. missile makers like Boeing along with Northrop Grumman (NOC - Free Report) , Raytheon Technologies (RTX - Free Report) , and Lockheed Martin (LMT - Free Report) .

Boeing’s stock has gained 36.5% in the past 12 months against the industry’s decline of 4%. 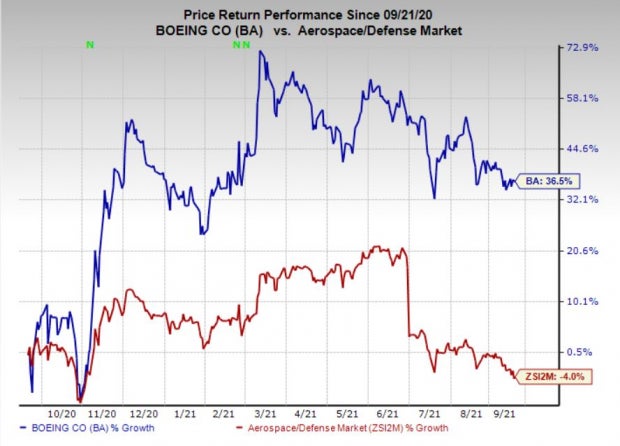 What Investors Should Expect From KB Home (KBH) Q3 Earnings