Last week, the European Automobile Manufacturers Association (“ACEA”) released data for passenger car registrations made in July and August 2021. Snapping four months of accelerated growth, new car registrations in Europe witnessed a year-over-year decline of 23.2% and 19.1% in July and August, respectively. Sales in each of the four key markets namely France, Spain, Italy and Germany saw double-digit declines in both the months. Nonetheless, over the first eight months of 2021, new car registrations grew 11.2% from the corresponding period of 2020. During the time period, total new passenger car registrations came in at 6.8 million. While Italy performed exceptionally well with sales surging 30.9%, France, Spain, and Germany also witnessed growth of 12.8%, 12.1%, and 2.5%, respectively.

Group 1 Automotive (GPI - Free Report) inked a deal to buy Prime Automotive Group assets for about $880 million. Per the agreement, which is expected to close by late November 2021, Group 1 will be purchasing 30 dealership locations and three collision centers throughout New England and the Mid-Atlantic region. Group 1 has been a success in the North-Eastern United States for many years and this opportunity will enable it to take advantage of the existing cost structure and further diversify its U.S. foothold. The acquisition will increase the company’s global dealership count to 218 (from the current count of 188) and add 1,800 employees to the Group 1 family.

Lithia Motors (LAD - Free Report) announced the acquisition of one of the top Honda stores in the Southeast region — Curry Honda — located in Chamblee, GA. This marks Lithia’s first dealership in the state of Georgia and its strategic location in the top 10 Atlanta market. The auto retailer also boosted its Southwest network with the buyout of the top Jeep volume dealer in California — the Orange Coast Chrysler Jeep Dodge Ram Fiat in Costa Mesa. These transactions were financed through Lithia’s existing on-balance sheet capacity. Together, these buyouts are anticipated to add $320 million in combined annualized revenues.

General Motors’ subsidiary, GM Defense LLC, has been awarded a $36.4-million contract by the U.S. Department of State to develop next-generation Large Support Utility Commercial Vehicles for the department’s Diplomatic Security Service. Per the contract, GM Defense will design a purpose-built Heavy-Duty (HD) Suburban and build 10 vehicles over the next two years. The vehicles will be delivered in two phases, the first one planned for next spring. Another production contract to build a fleet of 200 HD Suburban vehicles per year for nine years will be underway once the present contract is completed in or around May 2023.

In a bid to diversify its foothold beyond Europe and expand its presence in the emerging markets, Stellantis plans to launch three new locally-produced vehicles under its Citroen brand, starting next year. Citroen C3, expected to be launched in the second half of 2022, would be the first of the three models to hit the Indian market. Stellantis expects India to become the world's third-largest car market (after China and the United States) by 2030. The stock currently carries a Zacks Rank #3 (Hold). You can see the complete list of today’s Zacks #1 Rank (Strong Buy) stocks here. 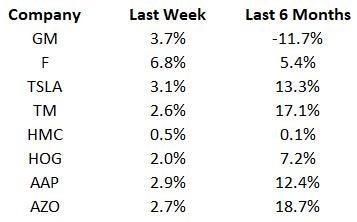 In the past six months, all stocks but General Motors have registered gains. In the past week, all stocks have increased, with Ford being the top performer.

Industry watchers will keep a tab on July and August commercial vehicle registrations, to be released by the ACEA this week. Investors are awaiting the quarterly results of Advance Auto Parts and AutoZone, which are scheduled to report this week. Also, stay tuned for coronavirus and chip crunch-related disruptions in the auto sector.