The electric vehicle (EV) market has been growing prolifically, with both legacy automakers and pure-play EV makers stepping up efforts to launch new models. While electric cars are taking off in a big way, the pickups have been rather slow in shifting gears to electric. But that’s about to change soon. Last week, the first edition version of Rivian Automotive’s all-electric R1T pickup truck rolled off the assembly line at the company’s Illinois factory. With that, this California EV startup becomes the first company to bring an e-truck into the U.S. market, beating auto giants like Tesla (TSLA - Free Report) , Ford (F - Free Report) and General Motors (GM - Free Report) . Deliveries of the “Launch Edition” R1T truck will commence this month. Keeping up with the heightened competition, Ford also commenced pre-production of F-150 Lightning. The company will invest another $250 million to ramp up the production capacity of its upcoming e-pickup to 80,000 annually.

Nikola Corporation (NKLA - Free Report) and CNH Industrial’s Iveco truck unit inaugurated the joint-venture manufacturing facility in Germany, dedicated to the development of Nikola Tre electric heavy-duty trucks. The production line, currently anticipated to be capable of manufacturing 1,000 units per shift a year, will likely be substantially ramped up in the upcoming years. The first Nikola Tre models produced at the facility will be deployed for select customers in the United States in 2022. The companies also announced their collaboration for testing and subsequent implementation of heavy-duty EVs and charging infrastructure at the Port of Hamburg during 2022.

Tesla’s Model 3 crash in Florida last week, which killed two people, will be investigated by the U.S. National Transportation Safety Board (“NTSB”). It is still debatable whether the vehicle involved in the crash was equipped with Autopilot or not. The NTSB will commence its investigation today and complete the work within a week so as to issue a preliminary report in about 30 days. This will be the second probe by the agency in a fatal accident involving Tesla’s models in less than six months’ time. The NTSB is also investigating a lethal crash in Texas involving a Model S sedan that crashed in a tree and burst into flames, killing both passengers in April. Meanwhile, Wedbush Securities, a Los Angeles-based investment firm,anticipates Tesla — which currently carries a Zacks Rank #3 (Hold) — to deliver 900,000 cars in 2021, followed by 1.3 million deliveries in 2022. You can see the complete list of today’s Zacks #1 Rank (Strong Buy) stocks here.

General Motors is working with South Korea's LG Energy Solution, its long-time EV partner, in tracking and solving problems linked to the battery fires in Chevrolet Bolts that have paralyzed the vehicle’s entire production line. General Motors has discovered two manufacturing defects in the battery cells supplied by LG from two of its plants (one in South Korea and one in Michigan) — a torn anode tab and folded separator — which, in rare circumstances, might lead to a battery fire. This has triggered three recalls (affecting roughly 142,000 cars) and cost $1.8 billion to the automaker since last November. To resolve the issue, the entire battery pack for the older models will be replaced, while the newer models will have only the defective modules within the pack replaced. The U.S. auto giant has extended the suspension of Bolt EV and EUV production till mid-October. 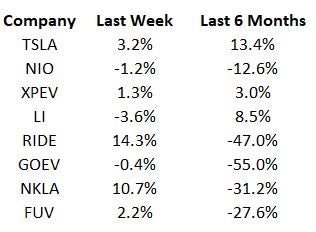 In the past six months, all stocks have decreased, apart from Tesla, XPeng, and Li Auto. Canoo bore the maximum brunt, with shares declining 55%. The past week also displayed a mixed price trend, with Lordstown Motors registering the maximum gain and Li Auto being the worst performer.

AutoZone (AZO) Warms Up to Q4 Earnings: What's in the Offing?