L3Harris Technologies (LHX - Free Report) expands the size of its campus and workforce in Fort Wayne, IN to meet rising demand of the Department of Defense for advanced, resilient satellites. The company’s expertise in electro-optical or infrared technology and a very fresh approach to the problem set helped it clinch the deal from the agency.

The new classified facility widens the total size of the campus to 150,000 square feet increasing the space for the missile defense satellite programs. This facility supports engineering, integration, testing and program management.

L3Harris Technologies will invest in new technology, which will help detect hypersonic missiles, strengthen the missile defense system and defend against threats. It will also track global weather patterns alongside boosting the American economy. Also, the company is expanding its Palm Bay site to increase the capacity of satellite production.

In August, L3Harris Technologies was awarded a Full Rate Production delivery order for its AN/PRC-165 Handheld-Video Data Link (HH-VDL) tactical radios by the U.S. Marine Corps that will enhance warfighters’ situational awareness and battlefield connectivity. Also, the U.S. Navy selected the company’s electro-optical/infra-red (EO/IR) airborne systems to support its P-8A Poseidon. Deliveries of the same will be completed by the end of 2022.

In September, it announced plans to divest its L3 ESSCO business to Communications & Power Industries. The motive behind the deal is to intensify focus on its core businesses, eliminate redundancies, and improve operational efficiency and cost structure.

L3Harris Technologies had secured some key new contracts in the second quarter, thereby maintaining its healthy win rate of about 70% with total awards until August being nearly worth $700 million. As evidence, its backlog increased 7% organically year over year to above $20 billion with notable award activity across all domains likely to boost its revenues. Its trend of winning prime-level awards across all domains represents multibillion-dollar growth opportunities for the company.

As far as government support is concerned, the company believes that the current U.S. administration's fiscal 2022 budget request, indicating an approximately 30% spending proposal over fiscal 2021 levels, for the National Oceanic and Atmospheric Administration (NOAA) should be beneficial for it. This budget is projected to reinforce L3Harris Technologies’ position as a leader in the weather payload and ground systems, creating a growth opportunity of $3 billion over the next decade.

With a three-year pipeline opportunity of nearly $20 billion in the Space, there's immense scope for the company’s growth, backed by its electronics and optics capabilities. Such solid growth opportunities may boost investors’ confidence in this stock.

Shares of this presently Zacks Rank #3 (Hold) company have gained 25.2% in the past year against the industry’s fall of 4%. You can see the complete list of today’s Zacks #1 Rank (Strong Buy) stocks here. 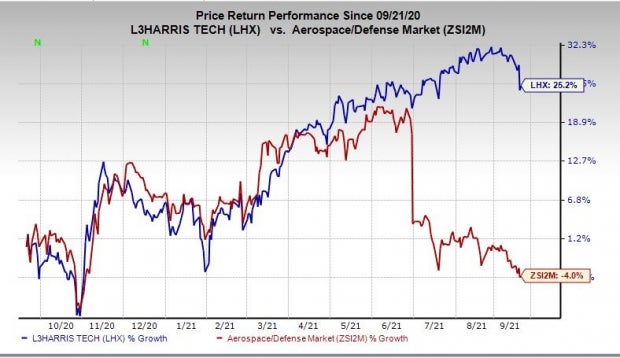 GPX vs. APEI: Which School Stock Investors Should Keep Tabs on?