Shares of Mosaic have gained 78.2% in the past year compared with 53.5% rise of the industry. 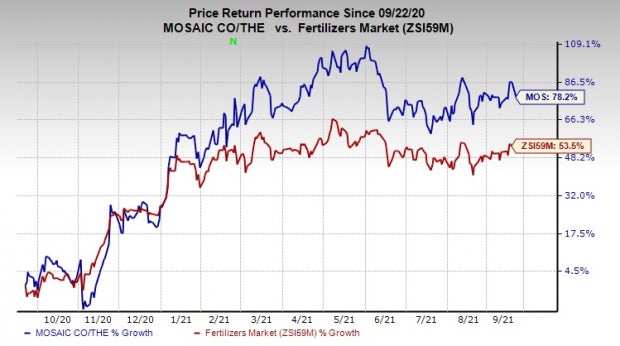 The company, in its last earnings call, stated that it expects strong agricultural trends to continue through the second half of 2021, driving demand for fertilizers. Grower economics remain attractive in most global regions on strong crop demand, affordable inputs and favorable weather, the company noted.

Nucor has a projected earnings growth rate of around 508% for the current year. The company’s shares have soared 112.1% in a year. It currently sports a Zacks Rank #1. You can see the complete list of today’s Zacks #1 Rank stocks here.

Chemours has an expected earnings growth rate of around 86.4% for the current year. The company’s shares have gained 38.6% in the past year. It currently carries a Zacks Rank #2 (Buy).

Olin has an expected earnings growth rate of around 639.3% for the current fiscal. The company’s shares have surged 265.3% in the past year. It currently carries a Zacks Rank #1.

Is USA Truck (USAK) a Worthy Stock for Value Investors?