Pittsburgh-based Carnegie Foundry already shares a relationship with the National Robotics Engineering Center at Carnegie Mellon University. The newly formed partnership is expected to leverage this association and will supplement Oshkosh’s current work in autonomous vehicles and equipment and support the essential service providers, which include frontline workers like soldiers, firefighters, as well as people engaged in environmental service, construction, and waste management.

Oshkosh noted that the Carnegie Foundry team comprises industry stalwarts with longstanding expertise in autonomy. An investment in it would bring Oshkosh’s customers at the fore of the rapidly evolving robotics and autonomy space.

Carnegie Foundry is equally enthusiastic as it believes that the partnership has the right blend of aligned mindsets and large-scale industrial specialization. It hopes to bring robotics and AI innovations to the market to cater to the present trend.

Shares of Oshkosh have risen 49.1% over a year against the industry’s 21.4% decline. 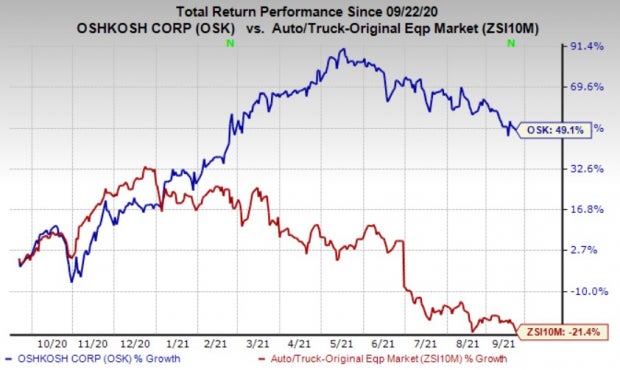 In its last-quarter earnings call, the company has downwardly revised fiscal 2021 projections due to the ongoing supply chain challenges. It now expects fiscal 2021 adjusted EPS in the band of $6.35-$6.50 compared with the prior view of $6.35-$6.85. Adjusted operating income is envisioned between $610 million and $630 million, down from the previously guided range of $610-$655 million.