CF Industries Holdings, Inc. (CF - Free Report) recently announced that it is halting operations at both its Billingham and Ince, UK, manufacturing facilities due to high natural gas prices. The company does not have an estimate for when production will resume at these complexes.

Shares of CF Industries have gained 53.9% in the past year compared with a 53.5% rise of the industry. 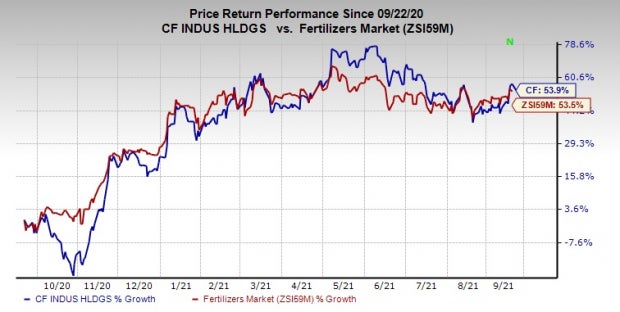 CF Industries, in its last earnings call, stated that it expects nitrogen pricing to be positive as higher economic activities, the need to replenish coarse grains stocks globally and increased energy prices in Europe and Asia are expected to sustain a tighter global nitrogen supply as well as demand balance into 2023.

The global demand for nitrogen is also strong, the company noted. It expects strong global demand for coarse grains to contribute to sustained low global stocks into 2022, supporting strong nitrogen demand in the upcoming years. An increase in economic activities has also contributed to higher industrial consumption of nitrogen products.

Nucor has a projected earnings growth rate of around 508% for the current year. The company’s shares have soared 112.1% in a year. It currently sports a Zacks Rank #1 (Strong Buy). You can see the complete list of today’s Zacks #1 Rank stocks here.

Chemours has an expected earnings growth rate of around 86.4% for the current year. The company’s shares have gained 38.6% in the past year. It currently carries a Zacks Rank #2 (Buy).

Olin has an expected earnings growth rate of around 639.3% for the current fiscal. The company’s shares have surged 265.3% in the past year. It currently flaunts a Zacks Rank #1.