Valued at $37.5 million, the contract is expected to get completed by December 2023. The latest modificationdeal increases the contract ceiling andboosts ancillary mission equipment procurement to support production of F-35 jets. The contract will serve the U.S. Navy, Marine Corps, Air Force, Foreign Military Sales customers, and non-U.S. Department of Defense participants.
Work related to this deal will be executed in Fort Worth, TX.

The F-35 program is recognized worldwide as evident by its eight international program partners— the United States, the U.K., Italy, the Netherlands, Australia, Norway, Denmark and Canada. Additionally, it has six Foreign Military Sales customers that are procuring and operating the F-35,namely Israel, Japan, South Korea, Poland, Belgium and Singapore. This reflects the growing importance of this family ofjets globally.
In July 2021, the Swiss Federal Council announced that it has selected Lockheed Martin's F-35 Lightning II as its new fighter aircraft. With thisselection, Switzerland becamethe 15th nation to join the F-35 program.
Such developments willaid the United States to continue dominating the combat aircraft space,with the F-35 Joint Strike Fighter jet program being one of the key catalysts.

Countries globally have been reinforcing their military resources due to intense geo-political tensions and amplified terrorist threats. This has spurred the demand for combat aircraft.The United States, which is the largest exporter of military weaponries worldwide, is focused on strengthening its military resources. This is quite evident from the allotment of a $12 billion investment plan, in the U.S. fiscal 2022 defense budget,for 85 F-35 Joint Strike Fighters. So, we may expect a solid flow of contracts from the Pentagon involving F-35 Joint Strike Fighters. The latest deal is a testament to that.
It is imperative to mention in this context that such budget allocation will not only benefit Lockheed Martin but also Northrop Grumman (NOC - Free Report) , BAE Systems (BAESY - Free Report) and Pratt & Whitney, a unit of Raytheon Technologies (RTX - Free Report) as these are leading supporters of F-35 Joint Strike Fighters production. While Northrop Grumman and BAE Systems supply components for mission systems and airframe,Pratt & Whitney offers its combat-proven engine to this jet. 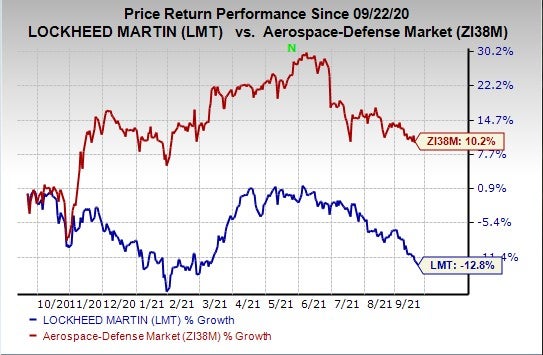 4 Reasons Why You Should Invest in Gap (GPS) Right Away