Netflix (NFLX) Wins Big at Emmy Awards 2021 With The Crown

Netflix’s (NFLX - Free Report) content portfolio is firing on all cylinders, which is evident from the massive number of awards it recently won at the 2021 Emmy Awards.

The streaming giant received 44 Emmys in total this year, tying the record for most wins by a single platform or network in a single year set by ViacomCBS (VIAC - Free Report) owned CBS in 1974.

The Crown won 11 awards, which included the awards for best drama series as well as best direction and writing for a drama series. This drama series based on the British Royal Family won 11 Emmys in total, tying Netflix’s other popular original series, The Queen’s Gambit for the most wins for an individual program for the year. The chess drama starring Anya Taylor-Joy won the coveted best limited series award.

Netflix also more than doubled its total wins from last year, when it had won 21 statuettes. The company’s endeavor to offer content catering to various genres has been a key catalyst in driving user engagement besides winning awards and accolades.

Despite its success, shares of this Zacks Rank #4 (Sell) company have returned 6.4% in the year-to-date period, underperforming the Broadcast Radio and Television industry’s rally of 11% as a decline in subscriber growth rate amid increased competition poses a concern. 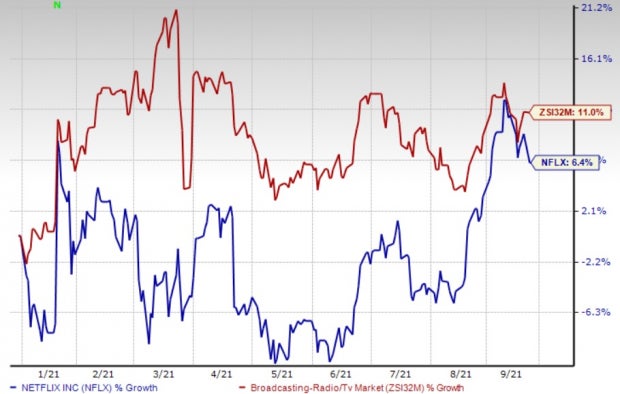 Other Streamers Grabbing the Spotlight at the Emmys

Overall, online video platforms accounted for more than half of the Emmy awards presented this year, further solidifying their status as the leading edge of creative content providers based on the voting by Television Academy members.

Other contenders like AT&T’s (T - Free Report) HBO and HBO Max led all nominees this year with a combined 130 nominations, followed closely by Netflix with 129. By comparison, HBO and HBO Max won 19 awards in total. Its show Mare of Eastown garnered four wins, Last Week Tonight earned two, Hacks scored three, and I May Destroy You secured one.

While The Crown and The Mandalorian tied for the most nominations for a program this year with 24 each, the latter won 7 awards. Disney+ picked up only one win at the Primetime Emmys, with Hamilton winning for the best pre-recorded variety special. Disney+ won 14 awards in total in 2021, up from 8 in 2020.

The other notable win by a streaming service during this month’s Emmys was recorded by ViacomCBS’s Pluto TV for distributing the MTV documentary feature 76 Days. Fellow streamers Amazon and Hulu did not fare as well, with both getting no awards this year.

4 Reasons Why You Should Invest in Gap (GPS) Right Away