Renowned tobacco company, Philip Morris International Inc. (PM - Free Report) , has been gaining from its efforts to expand in the reduced-risk products (“RRPs”) space as consumers become more conscious regarding health and wellness. The company’s much acclaimed IQOS — a heat-not-burn device — is among the leading RRPs in the industry.  It has also been making radical progress in the respiratory drug delivery platform, as part of the ‘Beyond Nicotine’ strategy announced earlier this year. Pricing power has played a key role in boosting the company’s top line.

Shares of this Zacks Rank #3 (Hold) company have gained 12.2% in the past three months compared with the industry’s rise of 2.1%. That said, let’s discuss some of the key efforts and growth strategies undertaken by the company.

RRPs, considered to be the next-generation tobacco products, have been gaining popularity owing to their less detrimental impacts on health. Consumers are inclining toward RRPs to quit or reduce cigarette consumption. Philip Morris is known for pioneering the shift from traditional cigarette to other low-risk alternatives. It had launched IQOS in the United States in 2019, through a commercial deal with Altria Group, Inc. (MO - Free Report) that was approved by the FDA. Since then, the company has been expanding the brand by introducing its newer versions with improved features. Total users of IQOS as of the end of second-quarter 2021 were estimated to be about 20.1 million, including nearly 14.7 million users who have shifted from smoking to IQOS. Strong growth in IQOS boosted revenues in the RRPs category, which increased 41.7% to $2,276 million in the second quarter. Heated tobacco unit shipment volumes of 24.4 billion units rose 30.2% year over year.

As part of its transformation efforts, the company is committed toward expanding IQOS. It has started commercializing IQOS VEEV, which is its new e-vapor product, and is also on track with the expansion of IQOS ILUMA. Such efforts keep the company well placed for its transition to a majority smoke-free company by 2025. The company is on track to achieve its 2021 goal of 95-100 billion shipments of heated tobacco units.

Philip Morris has been firm on its ambitious plans to expand Beyond Nicotine products. As part of this initiative, the company has been striving to achieve world-class expertise, scientific know-how and capabilities to develop products focused on inhaled therapeutics and respiratory drug delivery platforms for medical as well as wellness applications. In February 2021, the company announced plans of generating at least $1 billion in annual net revenues from the Beyond Nicotine business by 2025.

As part of the Beyond Nicotine strategy, the company acquired Fertin Pharma A/S — a leading manufacturer and developer of innovative pharmaceutical and well-being products that are based on oral and intra-oral delivery systems. Philip Morris acquired OtiTopic, a respiratory drug development company based in the United States. OtiTopic develops late-stage inhalable acetylsalicylic acid (“ASA”) treatment for acute myocardial infarction or heart attack. The company also secured more than 74% shares in Vectura Group plc, a provider of innovative inhaled drug delivery solutions for treating diseases related to smoking. 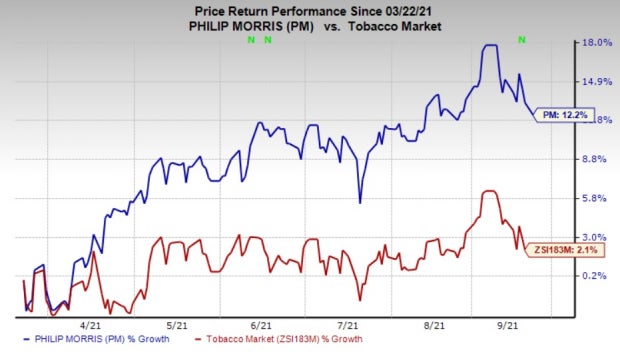 Strong pricing for tobacco products has been a significant upside for Philip Morris. This has been boosting the company’s revenues and adjusted operating income. Though higher pricing might lead to possible decline in cigarette consumption, it is seen that smokers tend to absorb price increases due to the addictive quality of cigarettes. Higher pricing variance was an upside to the company’s performance during the second quarter. In fact, gains from pricing contributed to growth across most regions during the quarter. Pricing power is likely to keep aiding the company’s performance in the forthcoming periods.

Philip Morris is undertaking every effort to transform itself into a company that puts health and wellbeing in the forefront. Its efforts to expand IQOS to support consumers’ shift from cigarettes to reduced risk options as well as moves undertaken as part of the Beyond Nicotine strategy are praiseworthy. Such prudent growth endeavors as well as gains from pricing are likely to keep supporting the company, as it battles headwinds related to the cigarette unit including stringent regulatory norms and declining market share.