Byooviz becomes the first FDA-approved biosimilar of any ophthalmology drug in the United States. Byooviz was approved in Europe in August. Samsung Bioepis and Biogen already have an agreement with Roche that will allow them to start the commercialization of Byooviz in the United States from June 2022.

The FDA approval was based on analytical, non-clinical, and clinical data from a phase III study evaluating Byooviz in wet AMD patients. The late-stage study compared the efficacy, safety, pharmacokinetics, and immunogenicity of Byooviz with the reference drug, Lucentis, over 48-weeks of treatment. Data on all key endpoints from the study for Byooviz were comparable to Lucentis.

Shares of Biogen have rallied 21.9% so far this year compared with the industry’s growth of 1%. 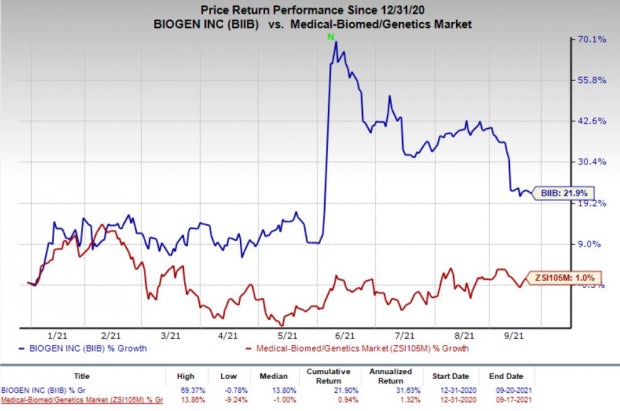 We note that the companies are also developing another ophthalmology biosimilar candidate, SB15 referencing Regeneron’s (REGN - Free Report) Eylea. Biogen continues to develop its biosimilar portfolio and the addition of the biosimilar of blockbuster drug, Lucentis will add strength to it.

The joint venture between Biogen and Samsung Bioepis has four other biosimilar products in its portfolio — Benepali/Eticovo, Imraldi/Hadlima, and Flixabi/Renflexis. Imraldi references one of the highest-selling drugs from the pharma sector, AbbVie’s (ABBV - Free Report) immunology drug, Humira. These biosimilar products generated more than $400 million in sales in the first half of 2021. Although the biosimilar drugs are approved in the United States, they are yet to be marketed in the United States due to commercialization restrictions due to existing patents or ongoing litigations for referenced drugs. The start of commercialization of these biosimilars in the United States is likely to boost Biogen revenues significantly.

The addition of new biosimilars to its portfolio will help Biogen to diversify its business with a renewed source of revenues while its strong positing in the multiple sclerosis market gets hit by new branded drugs as well as generic drugs of Tecfidera.