Valued at $140.4 million, the contract is expected to be completed in March 2024 and will serve the government of Canada. Per the terms, Raytheon will provide supplies and support including software, obsolescence management, engineering support, and associated technical, financial, and administrative data in relation to AN/APG-79(V)4 radar integration.

The majority of  the work related to this deal will be executed in Forest, MS, and El Segundo, CA.

Importance of the APG-79 Radar System

Further, its agile beam enables the multimode radar to interleave in near-real time so that pilots and crew can use both modes, simultaneously. The radar system also optimizes situational awareness and provides superior air-to-air and air-to-surface capabilities.

With the rapid escalation of geopolitical tensions globally in recent times, developed and developing nations have been boosting their defense arsenal significantly. Radars constitute a vital part of this arsenal.

Empirically, demand for military radar systems has expanded manifold in recent times, driven by factors like the rise in defense spending of emerging economies, an increase in regional tensions, and inter-country conflicts that have increased threats from missiles and aircraft. This in turn has been benefiting radar manufacturing companies like Raytheon in the form of contract wins like the latest one.

Per Markets and Markets Research firm, the global military radar market is expected to reach $17.4 billion by 2025 at a CAGR of 4.4% from 2020. Such growth projections for the aforementioned market should benefit prominent radar manufacturers like Raytheon Technologies, Lockheed Martin (LMT - Free Report) , L3Harris Technologies (LHX - Free Report) , and Northrop Grumman (NOC - Free Report) .

Raytheon’s shares have gained 39.5% in the past year compared with the industry’s increase of 31.9%. 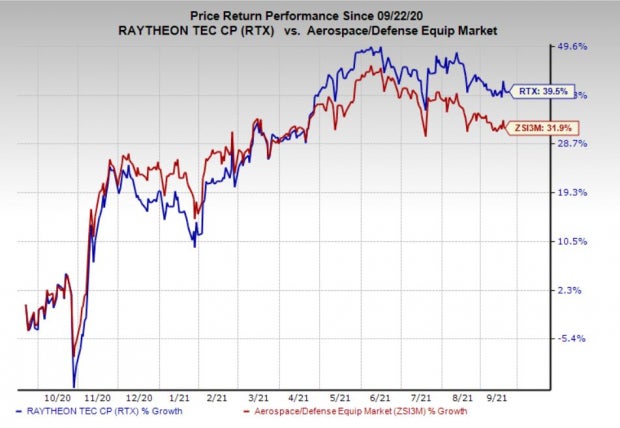 4 Reasons to Add Exelon (EXC) to Your Portfolio Right Now