AutoNation's (AN) CEO Jackson to Step Down, Manley to Take Over

Manley will take office from Nov 1, 2021. He will be responsible for maintaining the company’s growth as sales are rapidly shifting from the showroom to online platforms. He will earn an annual base salary of $1.3 million with an additional $1.5-million cash sign-on bonus. Per the contract, he will also have a chance to earn 200% of his annual base salary through an incentive award beginning in 2022, be granted $6.7 million in restricted stock units endowed over three years and get a scope to earn $7.2 million in stock awards annually through the company’s long-term incentive program, also due in 2022.

Stellantis was formed when FCA and PSA merged in January this year and Manley’s exit marks the first executive casualty of the company. Manley has been behind the successful turnaround of the Jeep subsidiary, which was an anchor of FCA profits. He will retain ties with Stellantis as a board member. After Manley’s stepdown, North America CEO Mark Stewart and Antonio Filosa, COO of Latin America, will report directly to Stellantis CEO Carlos Tavares.

Manley noted that he is enthusiastic to join the nation’s largest auto retailer. Rick Burdick, AutoNation's Chairman said that Manley’s comprehensive automotive experience is aligned with the company’s dedication to provide an unparalleled and innovative customer experience.

Under the able guidance of Jackson AutoNation became a prominent player in the auto industry and the largest retailer of many vehicle makers, including giants like Ford Motor and Mercedes-Benz. This provided the company a chance to influence the policies and decision-making of several large manufacturers. The company has had an exceptional stint, delivering record-breaking performance in five consecutive quarters in an unprecedented time. Jackson said that he has full faith that Manley will lead the company to more successes in the future.

Shares of AutoNation have climbed 128.4% over a year, outperforming the industry’s 82.9% rise 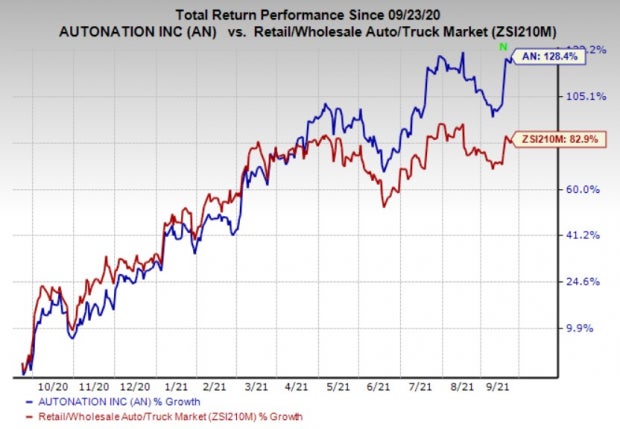