It has been a busy week for the biotech sector with quite a few drug approvals. Regulatory and pipeline updates from bigwigs like Biogen (BIIB - Free Report) and Bristol Myers (BMY - Free Report) , among others, have also grabbed the spotlight.

Regulatory and Pipeline Updates From Biogen: Biogen announced that the FDA approved Byooviz, a biosimilar referencing ophthalmology drug Lucentis (ranibizumab) for the treatment of neovascular (wet) age-related macular degeneration (AMD), macular edema following retinal vein occlusion (RVO), and myopic choroidal neovascularization (mCNV). The biosimilar has been developed in collaboration with Samsung Bioepis Co., Ltd. Per the company, this is the first ophthalmology biosimilar approved in the United States.  It was approved in Europe in August.

Earlier, the Committee for Medicinal Products for Human Use (“CHMP”) issued a positive opinion and recommended granting marketing authorization to Vumerity (diroximel fumarate) in the European Union for the treatment of adults with relapsing-remitting multiple sclerosis. A final decision on the same is expected in the coming months.

Biogen also announced top-line results from its phase II CONVEY study on pipeline candidate vixotrigine (BIIB074). The candidate is a non-opioid investigational oral pain drug being evaluated for the treatment of small fiber neuropathy (SFN). The study was a phase II placebo-controlled, double-blind, enriched enrollment randomized withdrawal study that enrolled 265 patients to evaluate the efficacy and safety of vixotrigine in treating pain experienced by participants with confirmed SFN that is idiopathic or associated with diabetes mellitus.  After a 4-week open-label run-in period, 123 responders to vixotrigine were randomized to receive either 200 mg or 350 mg vixotrigine or placebo twice-daily for 12 weeks in the double-blind portion of the study. The 200 mg dose achieved the primary endpoint of a statistically significant reduction in the mean average daily pain score versus placebo during the treatment period. However, the 350 mg arm failed to meet the primary endpoint. Nonetheless, the 350 mg dosage did achieve a statistically significant increase in the Patient Global Impression of Change at week 12, which is a measure of patients’ overall improvement when compared to baseline.

Incyte Wins FDA Nod for AD Treatment:  Incyte (INCY - Free Report) announced that the FDA has approved the cream formulation of its selective JAK1/JAK2 inhibitor ruxolitinib for the treatment of mild to moderate atopic dermatitis (AD).  Ruxolitinib cream has been approved under the brand name Opzelura for the short-term and non-continuous chronic treatment of mild to moderate AD in non-immunocompromised patients 12 years of age and older whose disease is not adequately controlled with topical prescription therapies, or when those therapies are not advisable.  The approval makes Opzelura, the first and only topical formulation of a JAK inhibitor, approved in the United States. The FDA approval was based on data from the TRuE-AD (Topical Ruxolitinib Evaluation in Atopic Dermatitis) clinical trial program, consisting of two randomized, double-blind, vehicle-controlled phase III studies (TRuE-AD1 and TRuE-AD 2).

Updates From Bristol Myers:  Bristol Myers Squibb announced that the FDA has accepted its biologics license application (BLA) for the fixed-dose combination of LAG-3-blocking antibody relatlimab and immuno-oncology Opdivo, administered as a single infusion, for the treatment of adult and pediatric patients (12 years and older and weighing at least 40 kg) with unresectable or metastatic melanoma. The agency has granted Priority Review to the application and set a target action date of Mar 19, 2022.  The submitted BLA was based on the positive efficacy and safety results of phase II/III RELATIVITY-047 study.

Earlier, the CHMP recommended approval of Opdivo in combination with fluoropyrimidine and platinum-containing chemotherapy for the first-line treatment of adult patients with HER2-negative advanced or metastatic gastric, gastroesophageal junction, or esophageal adenocarcinoma whose tumors express PD-L1 with a combined positive score (CPS) ≥ 5.

Exelixis’ Cabometyx Label Expansion: Exelixis (EXEL - Free Report) announced that the FDA approved Cabometyx (cabozantinib) for yet another indication. The drug is now approved in the United States for the treatment of adult and pediatric patients 12 years of age and older with locally advanced or metastatic differentiated thyroid cancer (DTC) that has progressed following prior vascular endothelial growth factor receptor (VEGFR)-targeted therapy. The patients are also radioactive iodine-refractory or ineligible. The FDA approval was based on positive results from the phase III study, COSMIC-311, which demonstrated significant improvement in progression-free survival with Cabometyx versus placebo.  The drug is already approved in the United States for advanced renal cell carcinoma and hepatocellular carcinoma.

Setback for Verrica:  Verrica Pharmaceuticals (VRCA - Free Report) suffered a setback with the FDA issuing a Complete Response Letter (CRL) to its new drug application (NDA) for the lead product candidate, VP-102.  The NDA is seeking approval of the candidate for the treatment of molluscum contagiosum (molluscum), a highly contagious viral skin disease.

The CRL was issued as the regulatory body has identified deficiencies at a facility of a contract manufacturing organization (CMO) that are not specifically related to the manufacturing of VP-102 but instead raise general quality issues at the facility. Nevertheless, the agency did not identify any clinical, safety or product-specific Chemistry, Manufacturing, and Controls (CMC) deficiencies related to VP-102. Per the company, the CMO implemented corrective actions to address the agency’s concerns and it expects a satisfactory resolution of the facility's identified deficiencies from the FDA within the next 30 business days. Meanwhile, Verrica will engage with the FDA to demonstrate that its good manufacturing practices, controls, and processes ensure that any deficiencies at the CMO do not affect the efficacy, safety or quality of VP-102.

Seagen Wins Drug Approval: Seagen Inc. (SGEN - Free Report) and partner Genmab A/S announced that the FDA has granted accelerated approval to Tivdak (tisotumab vedotin-tftv) for the treatment of adult patients with recurrent or metastatic cervical cancer with disease progression on or after chemotherapy. The accelerated approval was based on tumor response and the durability of the response. Continued approval for the same may be contingent upon verification and description of clinical benefit in confirmatory trials. The BLA for Tivdak was submitted in February 2021 and accepted with priority review in April 2021. The submission was based on the results of the innovaTV 204 study.

The Nasdaq Biotechnology Index has gained 0.83% in the past five trading sessions. Among the biotech giants, Incyte has gained 5.29% during the period. Over the past six months, shares of Moderna have soared 198.1%. (See the last biotech stock roundup here: Biotech Stock Roundup: MRNA Submits Vaccine Data, BMRN Down on Clinical Hold & More). 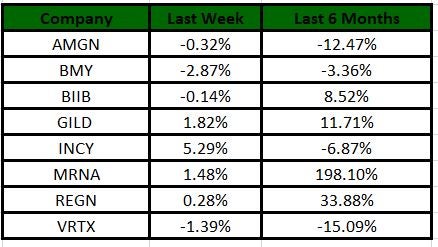