Choice Hotels International, Inc.’s (CHH - Free Report) upscale brands, the Ascend Hotel Collection and Cambria Hotels, have been doing solid business and performed impressively in the first half of the year.

In second-quarter 2021, the company’s Ascend Hotel Collection RevPAR change outperformed the upscale segment by more than 26 percentage points, compared with second-quarter 2019. The brand has been well received on account of smart conversion opportunities.

Janis Cannon, senior vice president, upscale brands, Choice Hotels said, “With Americans rediscovering domestic destinations and the continued return to travel, as well as the trend of work from anywhere, guests are increasingly turning to Ascend and Cambria, thanks to their uniquely local experience and upscale amenities that allow for exploration. As a result, our upscale brands are outperforming the local competition at record levels.” 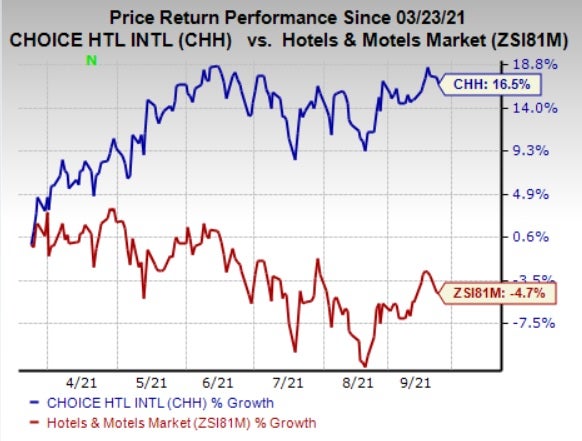 In the past six months, shares of the company have gained 16.5%, against the industry’s decline of 4.7%. Choice Hotels’ riveting growth potential depends on consistent expansion of its brands. During first and second-quarter 2021, it executed 89 and 200 domestic franchise agreements, out of which more than 80% and 43% were for conversion hotels, respectively. Apart from focusing on domestic growth, the company continues to expand its international footprint in new countries.

Civeo has a three-five year expected earnings per share growth rate of 10%.

InterContinental 2021 earnings are expected to increase 12.9%.