Curtiss-Wright, with its advanced and reliable technologies, has been part of important defense programs that have Congressional support. The company will be performing this contracted work at its Cheswick, PA facility.  The new contract builds upon the previously awarded contracts to provide propulsion valves, pumps, and advanced instrumentation and control systems, valued in excess of $130 million, received in second-quarter 2021.

The company is also involved in other naval programs apart from supplying essential parts to nuclear submarines and aircraft carriers. On Jun 7, 2021, the company announced that it has received a $70-million order from Lockheed Martin Corporation (LMT - Free Report) to provide its Modular Open System Approach computers and video processing modules to upgrade the Mission Computer and Flight Management Computer on the U.S. Navy’s fleet of Sikorsky MH-60R/S Seahawk helicopters.

The fiscal 2022 U.S. Department of Defense spending budget of $715 billion focuses on investment in new technologies that are aimed at enhancing national security and strengthening the capability of the armed forces.

Curtiss-Wright, with its highly engineered products and services, is expected to benefit from the new defense spending. In 2020, Curtiss-Wright generated 53% of sales revenues from a defense market contract.

In fiscal 2022, a fresh demand is also expected to be seen for other players in the industry having wide defense product offerings like AAR Corp. (AIR - Free Report) and Aerojet Rocketdyne Holdings, Inc. (AJRD - Free Report) , among others.

In the past six months, shares of Curtiss-Wright have gained 6.1% compared with the industry’s 4% growth. 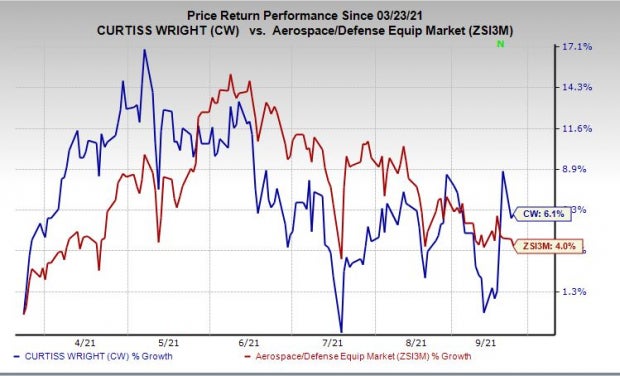 Here's Why You Should Discard Southwest Airlines (LUV) Now