The major acquisition is expected to add 200,000 barrels of oil equivalent per day (Boe/d) of production to ConocoPhillips’ portfolio, putting it just behind Exxon Mobil Corporation (XOM - Free Report) , which is likely to produce around 1 million Boe/d from the Lower 48 in 2021. Also, combined production from ConocoPhillips and Shell’s Permian assets in the second quarter reaches the second spot, beating Chevron Corporation (CVX - Free Report) , just below Pioneer Natural Resources, per Bloomberg.

The acquisition’s timing and patience showed by ConocoPhillips have been well pointed out by Andrew Dittmar, Senior M&A Analyst at Enverus. At the time of shale boom and Permian buyout frenzy, the company showed restraint and now it bagged Shell’s land at almost $15,000 per acre, way below Occidental Petroleum’s Anadarko acquisition of around $60,000 per acre in 2019, said Dittmar. He also noted ConocoPhillips’ Concho acquisition at $10,000 per acre this year, marking the company’s prudent time selection for such a deal.

ConocoPhillips is paying all cash for the transaction, which shows its balance sheet strength. At second quarter-end, it had a debt-to-capitalization of 29.8%, significantly lower than the industry average of 76.6%. After closing the deal in the fourth quarter, ConocoPhillips still expects to end the year with $4 billion in cash and short-term investments. The ability to pay the whole amount in cash might have played a major role in Shell’s decision-making process. After all, the company intends to use $7 billion from the proceeds to distribute to shareholders. Receiving $9.5 billion in cash can be helpful. It will use the rest for debt reduction.

What’s in the Future?

Ryan Lance, ConocoPhillips’ chief executive officer, expects demand for oil to recover to pre-pandemic levels by the beginning of 2022, per Bloomberg. An increase in oil consumption is likely to keep oil prices high as supply remains constrained by OPEC+ and others. As such, the Permian assets acquisition will help the company generate massive cash in the coming days. It expects to generate $1.9 billion in free cash flow in 2022. Rising cash from operations due to the deal will help the company to provide higher returns to shareholders, in line with its plan of returning 30% cash from operations to shareholders.

The upstream company’s shares have jumped 48.4% in the year-to-date period compared with a 28.6% rise of the industry it belongs to. Currently, it has a Zacks Rank #3 (Hold). You can see the complete list of today’s Zacks #1 Rank (Strong Buy) stocks here. 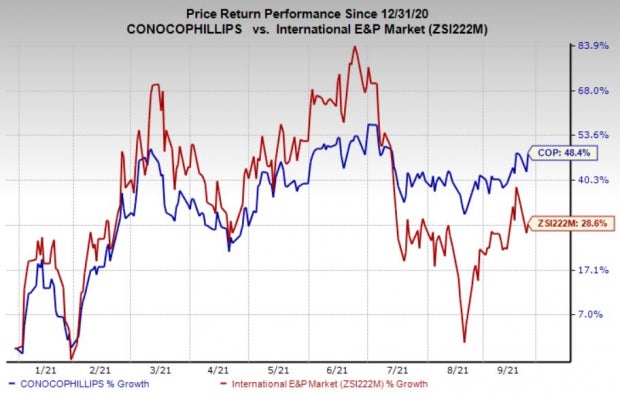