The majority of the work involved in the deal will be carried out in San Diego, CA and Red Oak, TX. The contract will serve the U.S. Navy and government of Australia.

UAS has been gaining importance lately owing to its cost effectiveness compared to manned aircraft andzero mortalityrate. This has resulted inahuge demand for Northrop Grumman’s MQ-4C Triton. The aforementioned deal is a testament to the fact.

Per a report from Research and Markets firm, the military segment of the global unmanned aerial vehicle (UAV) market is projectedtowitnessa CAGR of 9% over a period of 2021-2026. Such massivedemand for military UAVs globally may provide a boost to the growth of defense majors manufacturing UAVs.

It is worth mentioningthat Northrop Grumman,being an expert in UAV manufacturing,has immenseprospectsin the UAV arena. Apart from the aforementioned deal, in March, Northrop Grumman SystemsCorp won a contract worth $82 million to support MQ-4C Triton. Such contract wins will aid the company’s growth in the days ahead.

In the past one year, shares of Northrop Grumman have gained 7.4% compared with the industry’s growth of 15.5%. 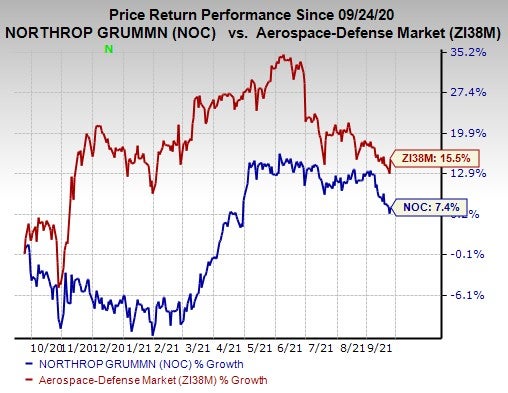 Textron delivered an earnings surprise of 32.79% in the last reported quarter.Ithas a long-term earnings growth rate of 28.3%.