Work related to the deal will be performed in Sterling Heights, MI, and is scheduled to be completed by Sep 30, 2022.

Nations are developing advanced new generation main battle tanks (MBTs) to equip their militaries amid rising geopolitical tensions. General Dynamics’ Abrams battle tank is one such tank and thus its demand continues to soar.
Apart from the solid demand on the domestic front, it has a robust customer base overseas. Major international militaries of nations like Egypt, Kuwait, Saudi Arabia, Australia, and Iraq are the primary customers of Abrams battle tanks. Therefore, General Dynamics witnesses solid contract flow for Abrams from Pentagon and other U.S. allies.

The company won a $4.62 billion worth contract for manufacturing Abrams M1A2 SEPv3 tanks, last year. The latest contract win is yet another bright example of the solid demand that this tank enjoys.

The fiscal 2022 U.S. defense budget included an allotment of $70 million for Abrams battle tank modifications. Such budgetary provisions should usher in more contract wins for the Abrams system and its associated technical upgrades from Pentagon. Such contract wins are likely to boost the company’s profit margin, going ahead.

Per a report by Mordor Intelligence, the MBT market is expected to register a CAGR of more than 3% during 2020-2025, which bodes well for manufacturers of such battle tanks like General Dynamics, BAE Systems Plc (BAESY - Free Report) , and Hyundai Rotem - part of Hyundai Motor Group (HYMLF - Free Report) .

Shares of General Dynamics have gained 41.5% in a year against the industry’s decline of 5.6%. 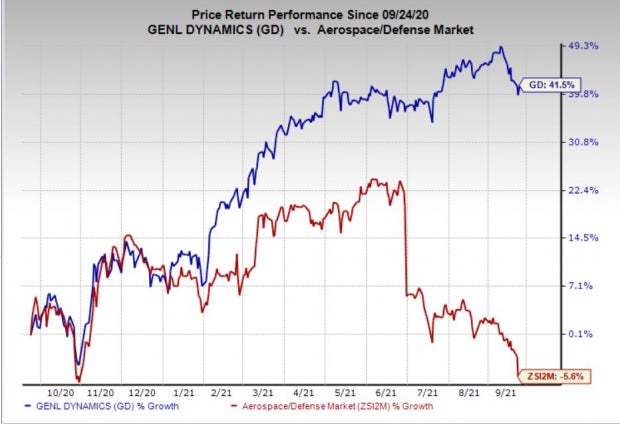 Textron delivered an earnings surprise of 37.41%, on average, in the last four quarters. The Zacks Consensus Estimate for 2021 earnings indicates growth of 58.5%.