Volkswagen AG (VWAGY - Free Report) has announced that it is starting the construction of a production plant for battery systems in Hefei, China. The plant, named VW Anhui Components Company, will be the first-of-its-kind to be fully owned by the China wing of the company and will commence production in the second half of 2023. Volkswagen presently operates an electric vehicle (EV) production plant together with JAC in Hefei, known as Volkswagen Anhui, and the new plant will be set up in its vicinity.

Volkswagen’s Chinese branch plans to invest more than $164 million in the new plant by 2025. The factory's initial capacity will be 150,000 to 180,000 battery systems annually for the company’s Anhui EV facility. The sprawling plant, having an area of 45,000 square meters, is expected to increase the value creation of Volkswagen components in the e-vehicles produced by the JAC-Volkswagen facility to roughly 40% and also provide a sound platform to initiate the production of the next generation batteries for China’s market.

Volkswagen noted that both plants represent important milestones for the company. The Volkswagen Anhui is the first Chinese joint venture for EVs wherein Volkswagen is a major stakeholder. The VW Anhui Components Company makes the group the sole owner of a battery system plant in China for the first time. The two plants are vital steps in the group’s electrification strategy and will steer it toward the goal of reaching more than 40% NEVs by 2030 by Volkswagen Group China fleet.

The Germany-based auto giant has been constantly revving up its electrification efforts to keep up with the heightened competition. Per the company’s five-year plan unveiled in November 2020, it intends to spend $86 billion in e-mobility, hybrid technology, and digitization through 2025. Green vehicles are set to account for 20% of its total sales by 2025. The firm targets 1 million EV sales this year and plans to launch 70 EVs by 2030. It intends to phase out the sale of internal combustion engine vehicles in Europe by 2035 and aims to make its entire fleet carbon neutral by 2050.

Shares of Volkswagen have climbed 92.1% over a year, significantly outperforming the industry’s 42.7% rise. 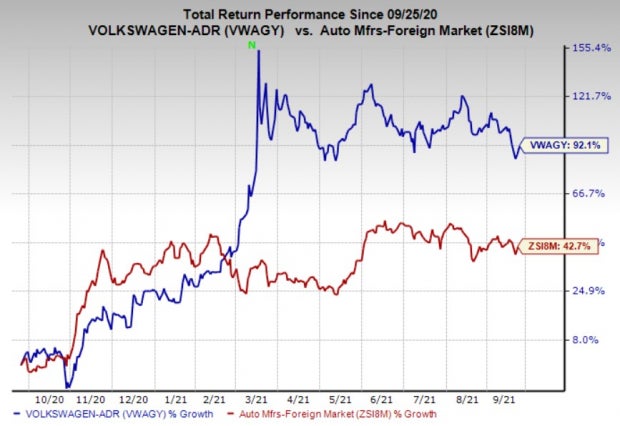