Over the past five trading sessions, the performance of major bank stocks depicted an optimistic stance. At the end of the two-day FOMC meeting, the Federal Reserve hinted at tapering its bond-buying program “soon” which many have interpreted as their next meeting in November.

This symbolic tightening of monetary policy was cheered by investors as this goes on to signal that the central bank is confident of economic recovery and won't let inflation get too high. Thus, yields on both 10-year and 30-year Treasury bonds have risen over the past week despite continued concerns over the increase in cases due to the Delta variant of the COVID-19 virus. The rate on the 10-year Treasury bond stands at 1.44% while that for the 30-year Treasury bond is 1.95%.

Thus, the steepening yield curve, as well as expectation of solid economic growth, will benefit major banks’ net interest margins amid a low interest rate environment. Though the Fed kept the short-term rates unchanged this time, there has been increasing expectations of a rate hike as soon as in the second half of 2022.

This, in turn, will support major banks’ top-line growth. With banks’ financials directly tied to the health of the economy, investors are now expecting improved profitability for major banks in the quarters ahead.

Now talking about bank-specific developments, the key theme during the past five trading sessions was business expansion (domestic and international). As major banks face revenue growth challenges owing to low rates and muted loan demand, they are undertaking measures to further diversify operations and fuel top-line growth through opportunistic buyouts.

Another major news that dominated bank investors’ sentiments was Wells Fargo’s (WFC - Free Report) persistent issue related to the $1.95-billion asset cap. The Fed Chair Jerome Powell noted that the central bank is closely watching the remedial efforts by the bank to mend its "widespread and pervasive" problems.

Important Developments of the Week

1. U.S. Bancorp (USB - Free Report) has entered into a definitive agreement to acquire MUFG Union Bank’s core retail banking operations from Mitsubishi UFJ Financial Group for a cash-and-stock transaction valued at $8 billion, in a bid to boost its presence on the West Coast. The deal, expected to close in the first half of 2022, will fortify the company’s presence in California, Washington, and Oregon.

2. JPMorgan (JPM - Free Report) has acquired the college financial planning platform, Frank. The entire business of Frank, including its Easy FAFSA, Classfinder College Course Marketplace, Scholarships & Employment tools, and Financial Education and Careers content, is being acquired. The acquisition adds to the many deals inked by the bank over the past few months in a bid to compete with technology firms.

3. JPMorgan has launched its digital retail bank Chase in the U.K. As planned, currently a smartphone app has been launched, which offers only current accounts. However, eventually, JPMorgan intends to provide savings as well as current accounts along with a wide range of banking services and loan products through the digital-only bank.

4. In order to help the bank trim costs and streamline its post-trade processes, Citigroup (C - Free Report) recently entered into a a strategic partnership with Snowflake to reassess and reform the processes across financial services transactions. Snowflake’s Financial Services Data Cloud aids firms to boost their top-line growth and steer innovation while alleviating any risk.

5. Wells Fargo’s looming $1.95-billion asset cap is likely to stay put “until the firm has comprehensively fixed its problems,” Federal Reserve Chair Jerome Powell said in the September FOMC press conference when asked about Senator Warren’s letter last week that urged the Fed to break up the Wall Street biggie.

6. JPMorgan has increased its regular quarterly dividend. The bank announced a dividend of $1 per share, representing a hike of 11.1% from the prior payout. JPMorgan has a track record of increasing its dividends since 2011. From paying 5 cents a share as the quarterly dividend during the 2008 financial crisis, the company has come a long way in terms of capital strength. 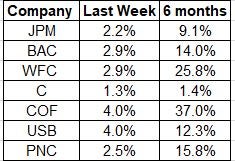 Over the past five trading days, both Capital One and U.S. Bancorp recorded maximum gains, with their shares rallying 4% each. Also, shares of both Wells Fargo and Bank of America have gained 2.9% during the same period.

Over the past six months, shares of Capital One and Wells Fargo have jumped 37% and 25.8%, respectively, while PNC Financial has gained 15.8%.

Over the next five trading days, unless there is any change in the macroeconomic/global situation, the major bank stocks are likely to perform in a similar fashion.