Three doses of BLU-5937 (12.5 mg, 50 mg, and 200 mg BID) are being evaluated in the targeted population in the SOOTHE study (n=310), a randomized, double-blind, four-week, parallel arm, placebo-controlled study. A total of 249 participants with a baseline awake cough frequency of ≥25 awake coughs per hour were randomized across four arms (1:1:1:1) evaluating the three active doses of BLU-5937 and placebo in the main study. The primary efficacy endpoint is the placebo-adjusted change in the 24-hour cough frequency from baseline to day 28 collected with a cough recorder. An exploratory group of an additional 61 participants with a baseline awake cough frequency of ≥10 and <25 coughs per hour were randomized across two arms (1:1) evaluating one active dose (200 mg BID) and placebo to further evaluate the effect of BLU-5937 in patients with lower cough frequency.

The BLUEPRINT study (n=142) is a multicenter, randomized, double-blind, placebo-controlled, parallel-design study evaluating the efficacy, safety, and tolerability of BLU-5937 in 142 participants with moderate to severe chronic pruritus associated with mild to moderate AD. Participants were randomized into one of two treatment arms (1:1) and receive either 200 mg BID of BLU-5937 or placebo for a four-week treatment period. The primary efficacy endpoint is the change from the baseline in weekly mean Worst Itch-Numeric Rating Scale (WI-NRS) score at week four.

Top-line results from both these studies are expected in December. 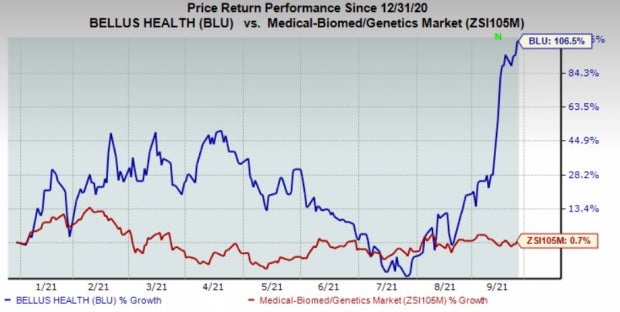 Last week, the company announced positive findings from a preplanned administrative interim analysis of the ongoing SOOTHE study. An independent statistical team reported that the predefined stringent probability threshold for clinical efficacy was met for at least one dose of BLU-5937.

The successful development and commercialization of the drug will be a significant boost for the company.

However, competition will be stiff for the company as bigwigs like Merck (MRK - Free Report) and Bayer (BAYRY - Free Report) are also developing P2X3 antagonists for refractory chronic cough.