Suncor Energy’s (SU - Free Report) joint venture Syncrude Canada Ltd. reduced oil supplies as a result of a mechanical turmoil at its oil sands site in Alberta, per a report by Bloomberg.

The company has a majority ownership in Syncrude, while Imperial Oil Limited (IMO - Free Report) , China Petroleum and Chemical Corporation (SNP - Free Report) , and CNOOC Limited are minority partners in the joint venture.

Canada is the world’s fourth-largest oil producer and Syncrude is one of the largest operators in the country's oil sands industry, with 50 years of effective operations and continuous innovation. Syncrude’s capacity of up to 360,000 barrels per day (bpd) constitutes about 10% of the country’s supply.

The facility, which upgrades mined bitumen from the oil sands of northern Alberta into light synthetic crude oil, produced nearly 275,000 bpd between January and May. Earlier this month, Syncrude owners delivered a force majeure notice to customers to inform a supply cut of as much as 20% in September. Notably, force majeure is an announcement of an unforeseeable event, which prevented a party to perform the contract.

Syncrude has been facing several operational issues since last year. In March 2020, Syncrude oil sands facility declared a similar force majeure event, following a fire incident at the plant. The fire broke out in one of Syncrude’s hydroprocessing units at its Alberta upgrading facility. The company reduced the production by about 20%.

Shares of the company have outperformed the industry in the past six months. Its stock has declined 4.1% compared with the industry’s 6.5% fall. 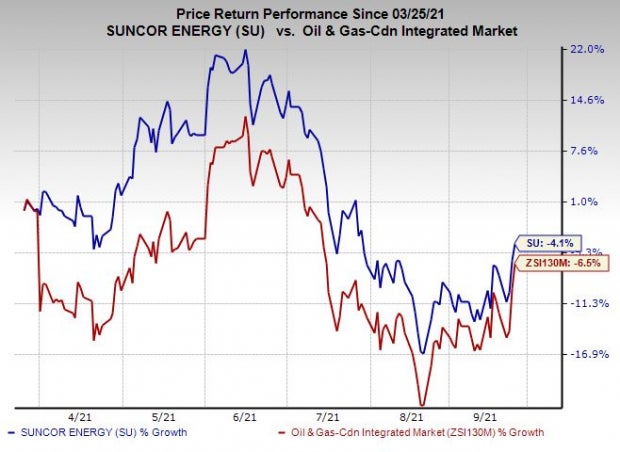