With the acquisition, Valley National will be able to broaden its commercial product offerings, and expand its technology and venture capital banking business, thereby, solidifying its position as a top-tier, relationship-focused commercial bank. The pro-forma company, which will be formed as a result of the merger, will be the 29th largest publicly traded U.S. bank by assets.

Bank Leumi, which provides full-service relationship banking for middle-market commercial clients and private banking services for high net-worth individuals, had $8.4 billion worth of total assets and $5.4 billion of gross loans as of Jun 30, 2021. It has a strategically distributed network as it operates five commercial offices in New York, Los Angeles, Palo Alto, Chicago, and Miami.

The transaction is expected to be 7% accretive to Valley National’s earnings (on a fully phased-in basis) in 2023. A 1% dilution to tangible book value is projected, which will be earned back in nearly a year.

At close, the deal is expected to be effectively neutral to Valley National’s tangible common equity to tangible asset ratio.

Valley National’s chairman, president & CEO, Ira Robbins, stated, “We are extremely excited about the combination with Bank Leumi and the diverse growth opportunities that we expect the partnership will bring. Bank Leumi’s unique deposit verticals, including the technology and venture capital business, will continue the significant funding improvement that we have driven over the last few years. On the lending side, Bank Leumi will add diversification into niche C&I segments and new geographies including in California and Illinois.”

Bank Leumi Le-Israel B.M.’s CEO, Hanan Friedman, said, “For Leumi, this is a strategic move designed to deepen and expand our exposure to the U.S. The merger will provide Leumi significant and unprecedented presence and market access for an Israeli bank in the U.S. This is positive news for our commercial and technology customers, who will enjoy a wider range of product offerings and the capabilities of a top and prosperous U.S. bank.”

Further, Valley National is leveraging digital technology and has launched its online bank — Valley Direct. This will help the company in reaching beyond its current footprint in New York, New Jersey, Florida and Alabama.

So far this year, shares of Valley National have gained 32.3% compared with 30.3% growth recorded by the industry. 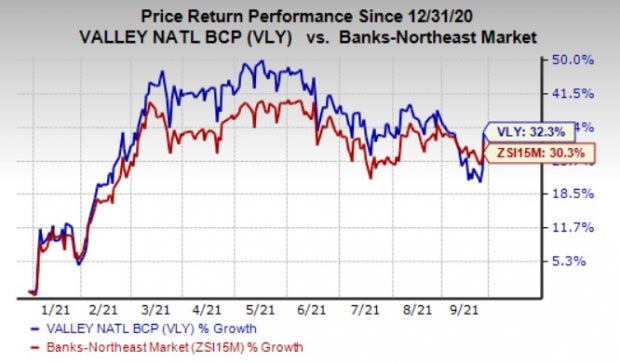 Tap the Crude Rally With These 3 Promising Upstream Firms