Twitter (TWTR - Free Report) recently announced that it will enable users to tip their favorite content creators with bitcoin besides third-party payment providers, marking its path among major social networks that encourage use of the cryptocurrency as a method of payment.

The company is integrating bitcoin payments through Strike, which uses the Lightning Network — a blockchain-fueled network that enables real-time transactions. To participate, users in eligible geographies must create a Strike account which is currently available across the Unites States except New York and Hawaii, and the country of El Salvador.

In addition to their Strike usernames, users will be able to add a Bitcoin Lightning wallet or their Bitcoin addresses to their profiles. That can be copied and pasted into any crypto wallet of choice to transfer bitcoin tips. Lightening wallets are popular among users in the crypto community due to their lower transaction fees.

Besides Bitcoin, Twitter will let users connect nine traditional payment providers to their profiles to accept tips. The Tip Jar feature was introduced in May as a beta product, allowing users to send and receive one-time payments through third-party services like PayPal, Venmo, Patreon, Cash App, Bandcamp and others. It will now expand to global audiences on iOS with Android coming soon.

The recent launch is expected to boost user engagement and performance of Twitter’s shares. The stock has returned 23.1% in the year-to-date period against the Zacks Internet – Software industry’ decline of 3.8% and the S&P 500’s rally of 18.2%, respectively. 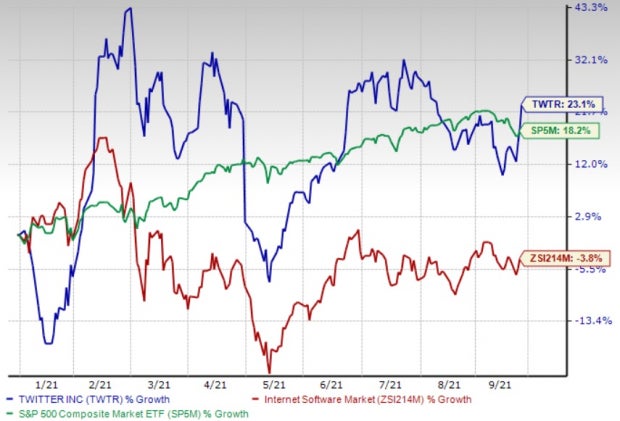 Endeavors Toward the Adoption of Cryptocurrencies

Twitter’s app will notify someone when they receive a Bitcoin tip through Strike, letting them quickly reply to the tipper to thank or send an emoji reaction. Twitter will also generate invoices for creators to track the tips they receive.

This Zacks Rank #2 (Buy) company also plans to support authentication for non-fungible tokens (NFTs), which are digital assets such as images or videos that exist on a blockchain. The feature will let users track and showcase their NFT ownership on Twitter by allowing NFT creators to connect their crypto wallets to Twitter. You can see the complete list of today’s Zacks #1 Rank (Strong Buy) stocks here.

NFTs have recently gained popularity as a way to buy and trade digital art on the Ethereum blockchain. A few months ago, Twitter did a giveaway of NFTs that were minted on a marketplace called Rarible.

Twitter continues to ramp up its effort to safeguard its platform and boost trustworthiness besides the above-mentioned updates to court creators. The company provides them more ways to share their work on the platform and generate more ways to make money.

It will soon launch a feature that will allow users to remove themselves from a conversation they are mentioned in. The company is experimenting with a new feature called Word Filters that will let users stop abusive tweets that don’t go against Twitter policy.

Twitter also created new features like enabling users to edit follower lists and a tool to archive old tweets to restrict its visibility to others after a specific amount of time.

Other features like the soft block allows users to swiftly remove unnecessary followers from their list without having to block them permanently. This will enable the user to control the audience of their tweets.