Valued at $1.10 billion, the contract is expected to get completed by May 2026. The F-35 jets will be delivered to the U.S. Air Force and Marine Corps.

The majority of the work related to this deal will be executed in Fort Worth, TX.

The rise in global terrorism and adverse geopolitical situations have increased the need for enhancing the nation's defense budget, a major portion of which is allocated to combat aircraft. The F-35 program is supported by an international team of leading aerospace majors, including Northrop Grumman (NOC - Free Report) , BAE Systems (BAESY - Free Report) , and Pratt & Whitney, a unit of Raytheon Technologies (RTX - Free Report) . Northrop Grumman renders its expertise in carrier aircraft and low-observable stealth technology to this program. BAE Systems’ short takeoff and vertical landing experience, and air systems sustainment support the jet’s combat capabilities. Pratt & Whitney offers its combat-proven engine to this jet.

Such features have enabled the F-35 jet to dominate the combat aircraft market, buoyed by solid demand, as is evident from the frequent contract wins involving the F-35 program and its associated upgrades, both from Pentagon and other U.S. allies. The latest contract win is a bright example of that.

As of Jun 27, 2021, Lockheed Martin delivered 665 F-35 airplanes since the program's inception with 302 jets still in the backlog. This surely boosts sales expectations for the Aeronautics business segment in the coming days.

Interestingly, the production of F-35 jets is expected to continue for many years, given the U.S. government's current inventory target of 2,456 aircraft for the Air Force, Marine Corps, and Navy. Consequently, we expect Lockheed Martin to witness more order inflows for F-35 and its associated upgrades, like the latest one, which in turn should bolster this defense contractor’s top line.

Notably earlier this month, Lockheed won a $6.6 billion contract to support operations and sustainment of its global F-35 fleet. Interestingly, this contract will aid Lockheed in achieving its target to reduce the F-35 program’s cost by 40% in the next five years, in addition to the 44% decline it has already achieved in the past five years. No doubt, the successful achievement of such cost reductions will usher in more contracts for F-35 in the coming days, which in turn should boost Lockheed’s future top-line performance.

Shares of Lockheed Martin, a Zacks Rank #3 (Hold) company, have lost 1.5% in the year-to- date period compared with the industry’s decline of 10.8%. You can see the complete list of today’s Zacks #1 Rank (Strong Buy) stocks here. 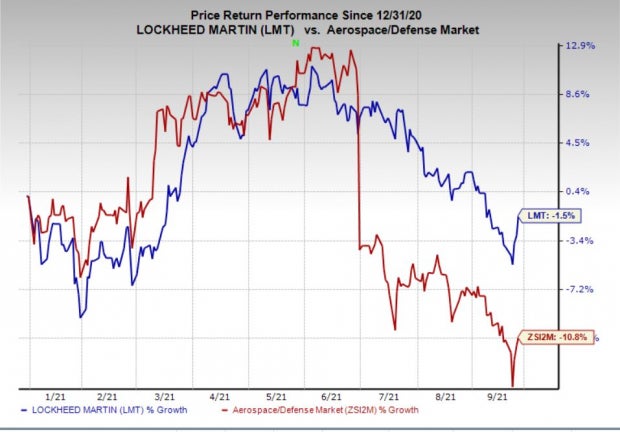 Amgen (AMGN) Repatha Gets FDA Nod for Expanded Use in Kids