Natural gas prices have been rising this year. The reason, according to the U.S. Energy Information Administration (EIA) is a warmer-than-usual summer that boosted electricity consumption for air conditioning, increased liquid natural gas (LNG - Free Report) exports and flat production, which in combination led to a lower inventory build for the winter. The fact that hurricane Ida disrupted production in August also didn’t help.

The other contributing factor was that natural gas prices typically rise in times of economic expansion, because of its use in the commercial sector, as well as processing in several industrial segments like chemicals, fertilizers, paper and glass. And we know how rapidly the economy has turned around.

It’s now expected that prices will remain elevated through the winter because of the low inventories and increased demand from consumer, commercial and industrial users. And that is despite electric power consumption dropping an estimated 8.3% this year as the sector shifts some consumption to coal (the usual fallback when prices continue to rise). The electric power sector is the largest end-use case for natural gas, and it’s highly sensitive to prices. Less elastic demand comes from things like lease and plant fuel, pipeline and distribution use, and vehicle use and these segments are likely to see steady growth through 2022.

The EIA estimates that despite increased production, natural gas inventories will be 5% below the 5-year average at the end of the 2021 injection season (October-end). Next year, demand from electricity suppliers will fall further, as additional clean energy sources come online.

U.S. natural gas inventories ended August 2021 at about 2.9 trillion cubic feet (Tcf); inventories will end the 2021 injection season (end of October) at almost 3.6 Tcf, which would be 5% below the five-year average.

Since the U.S. is more or less replete in natural gas resource, the domestic market is well-developed with consumption balancing production more often than not, leading to low and steady prices. But the last few years have seen increased recognition across the world of LNG as a clean fuel and countries like China have made it part of their clean energy strategy. The high demand in Europe and Asia has sent global prices soaring, which in turn has encouraged U.S. manufacturers to export. The expansion of the domestic LNG market is changing the operating dynamics with the potential for prices to rise and stay higher in the future (because of increased international demand).

Most players are involved in both natural gas and crude operations, although there’s an increased focus on natural gas of late.

Cheniere Energy intends to construct up to six liquefaction units (“trains”) at Sabine Pass with each train expected to have a capacity of about 4.5 million tons per annum. Trains 1,2,3,4 and 5 are functional and Train 6 is in early commissioning with estimated completion in the first quarter of 2022.

The company also has a liquefaction and export terminal in Corpus Christi, TX, where trains 1, 2 and 3 were completed ahead of schedule and within budget to produce around 5 million tons per annum (mtpa) of LNG. Two of these are currently operational while a fourth one is under construction. The facility’s two berths have the capacity to receive the Q-Max (the world’s largest LNG carrier), which is 344.4 meters long with a 266,000 cubic meter cargo capacity.

Global LNG demand is likely to continue growing for the next few years. Cheniere Energy, the U.S.’s only listed LNG export pure play, foresees the fundamentals of LNG to be favorable in the long run, considering the secular shift to the cleaner burning fuel for power generation worldwide.

The increasing demand for gas in the European power sector will be a key factor driving near-term LNG supply, as extremely high demand stemming from a colder-than-usual spring and limited wind energy has depleted inventories. Europe is the second biggest market for Cheniere so far this year (35% share), the largest being Asia (45% share), particularly China and South Korea. An early start to the summer, a surge in economic recovery and industrial activity in China, along with heavy nuclear maintenance in Korea is driving demand in the region.

Being in the expansion phase of a capital-intensive business isn’t easy and the company has acquired a significant amount of debt. At the same time, its long-term contracts ensure steady cash flow and provide excellent visibility into the future.

It’s therefore particularly encouraging that Cheniere’s expected earnings growth of 976.5% this year and 119.7% next year are significantly higher than its expected revenue growth of 46.4% and 13.6%. After a correction 30 days ago, its estimates are again on the rise.

The shares carry a Zacks Rank #2 (Buy) and at 16.8X P/E, they’re trading below their median level over the past year. Definitely worth considering.

The Appalachian Basin incorporates prolific acreages in Marcellus, Utica and Upper Devonian shale formations. In the Marcellus formation of the basin, it has a multi-decade inventory of premium drilling locations. Of the 3,100 undrilled wells in the region, 2,600 wells are liquids-rich and the rest have a natural gas predominance. Following the merger with Memorial Resource Development Corporation a few years back, Range Resources created a core acreage position in North Louisiana comprising 140,000 net acers with multiple formations of productive oil and natural gas.

Despite its considerable liquid resources, the company has been focusing on natural gas production because of growing global demand for clean energy. In 2020, its total production averaged 2.23 million cubic feet equivalent per day, of which 69.4% was natural gas. A similar trend is seen this year.

The shares carry a Zacks Rank #1 (Strong Buy). At 8.9X P/E, they’re trading below their median level over the past year, making them really cheap at these levels.

Oklahoma City, OK-based Continental Resources is an explorer and producer of oil and natural gas. The company operates premium resources in the North Dakota Bakken and Montana Bakken (among the country’s largest onshore oilfields) in northern U.S., the SCOOP and STACK plays of Oklahoma in southern U.S. and undeveloped leasehold acreage in eastern U.S. It also has strategic water assets in Bakken and Oklahoma.

Given its presence in prolific regions, the company expects oil equivalent production growth of 8-10% CAGR from 2019 to 2023 which is expected to translate to average annual free cash flow of $3.5-$4 billion over the five-year period.

The shares of this Zacks Rank #1 company are currently trading at a P/S of 3.1X, which is between their median and high values over the past year, although much lower than the S&P 500. While not cheap, they can’t be considered expensive either.

As of December 31, 2020, it had estimated proved reserves of approximately 543 billion cubic feet equivalent, which included 540 billion cubic feet of natural gas and 0.5 million barrels of crude oil or other liquid hydrocarbons of oil and condensate.

Shares of this Zacks rank #1 stock currently trade at 4.8X P/E, which is below their median level over the past year and of course much lower than the S&P. They’re a steal at these levels.

Magnolia Oil & Gas is an independent upstream operator engaged in the exploration, development and production of natural gas, crude oil and natural gas liquids. Headquartered in Houston, TX, the firm is focused on the high-quality Eagle Ford Shale and Austin Chalk formations in South Texas.

In South Texas, Magnolia’s position consists of more than 460,000 net acres, of which around 23,500 net acres are located in the highly productive Karnes County and nearly 440,000 net acres in the re-emerging Giddings Field.

The company focuses on growth through a combination of acquisitions and active drilling. Since its inception in 2018, Magnolia has spent around 60% of operating cash flow on capital expenditures, 26% on acquisitions, 8% on stock buybacks, while preserving the remaining 6% as cash. In particular, Magnolia is focused on returning significant cash to its shareholders: it aims to repurchase 1% of its total scrips outstanding each quarter and introduce a semi-annual cash dividend in 2021.

Given the COVID-related disruption in 2020, it’s understandable that revenue and earnings are expected to jump 88.7% and 10050% this year. But the fact that it is on track to deliver 6.7% revenue growth and flattish earnings growth next year is particularly encouraging.

The Zacks rank #1 stock is trading cheap at 8.4X earnings (below median level of 11.8X over the past year). 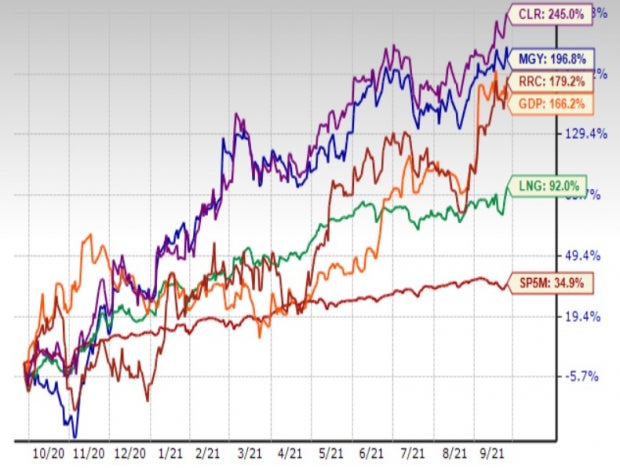 This article was re-issued to correct a mistake.