Phillips 66's (PSX - Free Report) troubled Alliance refinery in Louisiana is being reviewed by Hilcorp Energy for potential conversion into an oil export terminal, per a report by Reuters.

Oil producer Hilcorp is considering purchasing the Alliance refinery, which occupies 2,400 acres along the Mississippi River and has a processing capacity of 255,600 barrels per day. However, Hilcorp did not reveal any details about its interest in the facility. The conversion of the Alliance site would eliminate it as a source of motor fuel.

In August, Phillips 66 announced plans to divest the Alliance refinery and began meeting with potential buyers. The divestment strategy was due to the continued losses as demand for gasoline and jet fuel declined massively, owing to the coronavirus pandemic. Beside this, power outages and shutdowns caused by major hurricanes kept the company from restoring normal operations at the refinery.

The Alliance refinery has been one big headache, either due to the hurricanes or low profitability. The company was uncertain whether to invest in major repairs or shut down the facility as damages from the storm were severe. Hence, the refinery remained for sale and its marketing process is ongoing.

The Alliance refinery is one of the three refineries along the U.S. Gulf Coast that has been put up for sale this year. The other refineries are LyondellBasell Industries’ (LYB - Free Report)  263,776-bpd Houston crude oil refinery and Royal Dutch Shell plc’s (RDS.A - Free Report) 211,146-bpd Convent Louisiana refinery.

Phillips 66 plans to advance its businesses in renewable diesel, hydrogen and materials for electric-car batteries. This indicates possibilities of its refining business suffering in the long run since the demand for cleaner fuel is increasing. Thus, the conversion of the Alliance refinery into a crude oil storage and distribution terminal can be useful.

Shares of the company have underperformed the industry in the past six months. Its stock has declined 13.8% compared with the industry’s 3.5% fall. 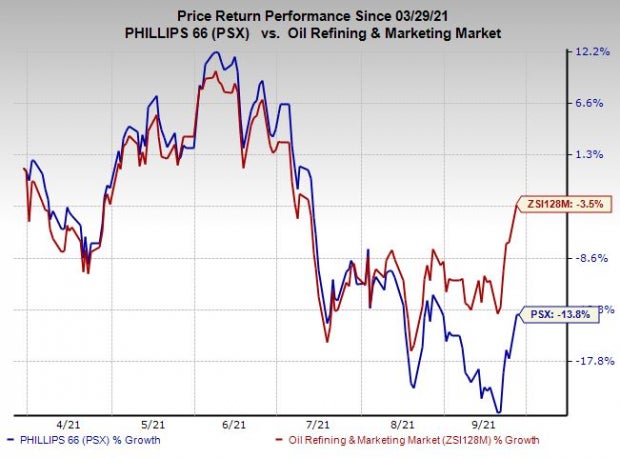 Range Resources’ earnings for 2021 are expected to increase 45.5% year over year.